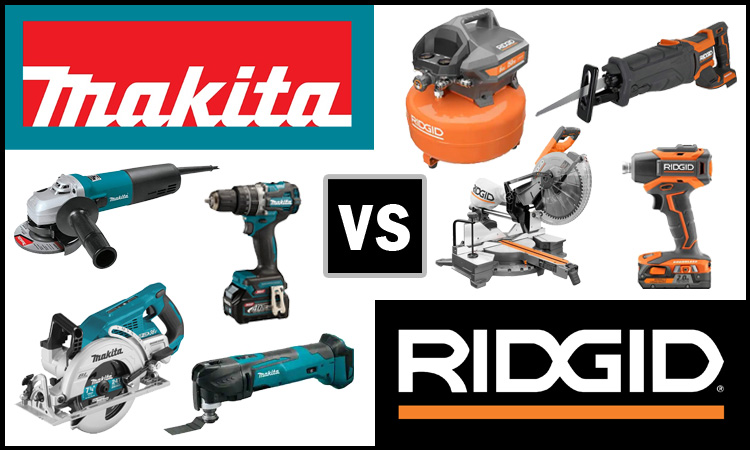 Competition within the power tool market has never quite been as widespread and fierce as it is today. The variety of brands and their dedication to innovation make it difficult for consumers to make a decision as to which one best suits their needs.

Two power tool brands that are often compared are Makita and Ridgid. Both of these mainstays of the tool industry arrived on the power tools scene around 100 years ago.

Each of these companies also continues to serve as powerhouses within the tool market, by staying at the forefront of innovation yearly.

The following guide has been developed to compare Makita and Ridgid, on like characteristics, thus allowing consumers to better select the particular brand that best suits their situation.

Read on to learn more about which is better for your needs, Makita or Ridgid.

Although Makita and Ridgid’s roots are continents apart, both have a long history in the tool market.  Each company has their own distinctly original story, worthy of a quick read by any interested consumer.

The following is a brief summary of Makita and Ridgid’s rise to profitability.

Makita became the first Japanese company to manufacture electric planers in 1958, after spending 40 years dedicated to manufacturing generators. This beginning venture into the power tool market proved very successful and they released a portable groove cutter later in the same year.

Makita began changing its business direction in the 1960s and became more centered around the production of power tools. Makita released their first battery-powered drill, the 6500D, in 1969.

The 1970s were a decade of expansion as first Makita U.S.A was established, followed closely behind by markets in Australia, Canada, France, and Germany. Makita’s product catalog started expanding as quickly as their manufacturing plants with the addition of impact drivers, grinders, circular saws, impact drivers, and other such tools.

In 2004, Makita developed its first line of brushless motor fastening tools for the aerospace and defense industries and further expanded this line with the addition of its first 18V brushless motor impact driver.

As Makita’s number of consumers grows, the power tools product catalog also grows. They now have a bench and stationary type of products such as a reciprocating saw or Sawzall, miter saw, table saw, Cut Off Machines, Drill Presses, Planers, Spindle Sanders, and Stand.

Today Makita’s growing consumer base worldwide helps it rank as one of the top manufacturers of rechargeable battery-powered tools.

Almost a century ago, the Ridgid Tool Company was founded by Carl Ingwer Sr. and made its headquarters in Elyria, Ohio. The company was incorporated in 1923 for the design of a brand new all-purpose pipe wrench. Although it began with just one wrench, Ridgid quickly expanded its line of plumbing and pipe maintenance instruments.

Ridgid Tools was formed in the 1960s as a result of a merger between Ridgid and the well-respected Emerson Electric. After Ridgid Tools purchased the Kollman Company of Erie, Pennsylvania, it expanded into the portable drain cleaning industry.

In 2003, Ridgid became a member of the battery-operated tool world’s ranks by developing its own line. Their specialty impact drivers and portable drills were most widely recognized among their offerings.

The company recently combined its pipe work and battery-operated products, releasing the RE 6. This device is durable (and flexible) enough to cut wire, crimp lug nuts, and punch boxes without the need for extra equipment.

Many consumers  place substantial value upon a given company’s manufacturing practices. To help consumers make a more educated purchasing decision for tools, we have outlined the production history of Makita and Ridgid tools. 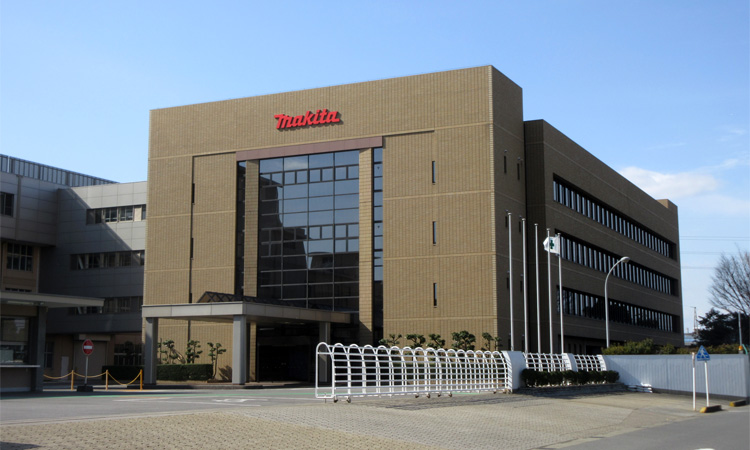 Makita Tools is headquartered in Nagoya, Aichi, Japan, but operates manufacturing facilities around the world. The company also maintains home offices in several different countries, including the following.

The home office of Makita USA is located in La Mirada, CA, but Makita has a distribution network that spans across the United States. Makita distribution warehouses are operated in the following cities.

Read Also: Makita vs DeWalt (Which is Better?) 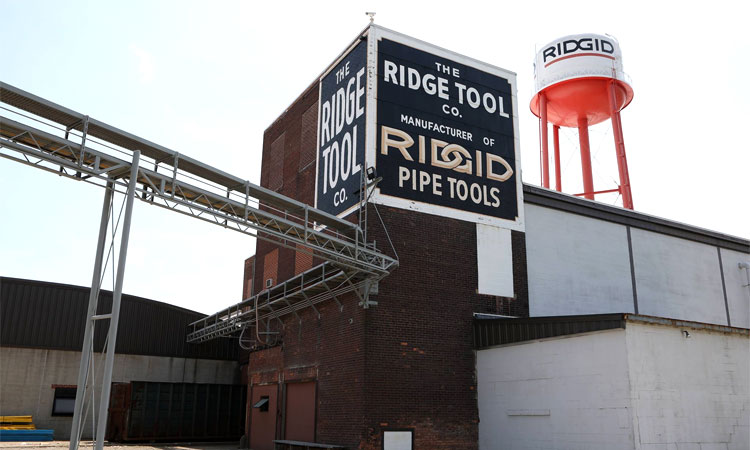 Ridgid Tools is still headquartered in Elyria, Ohio, despite the fact that its tools are now produced both in China and the US. In general, Ridgid power tools are manufactured overseas while the bulk of their hand tools are produced in the United States.

Most Ridgid tools are now produced by Techtronic Industries (TTI) which signed a licensing agreement dating back to 2003. Ironically, TTI is the same firm that owns or manages a number of premium power tool brands, including Milwaukee and Ryobi.

Makita and Ridgid both offer a comprehensive lineup of specialty power tools, designed to simplify most any task. In fact, a number of such offerings have even become favorites of dedicated tradesmen, from a number of crafts.

The following are several highlights from Makita and Ridgid’s product catalogs. 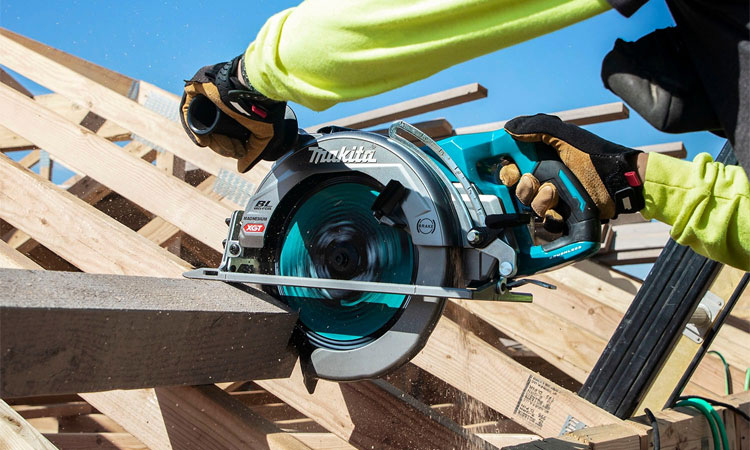 Although Makita manufactures several different power tool lines, it is best known for its set of electric saws, drills, and impact drivers. But the most popular, to date, would have to be the company’s series of 18V LXT tools.

The LXT line of tools numbers up to 270 different power tools and accessories, all of which are compatible with the Makita 18V Lithium-Ion battery. This line features an enhanced battery that is coupled with communication technology that helps it produce power, speed, and runtime that is unmatched.

The LXT line’s most popular tools include drills, impact drivers, grinders, and even weedeaters, and chainsaws. When using the  LXT X2 tools, simply using two 18V Lithium-Ion batteries doubles the power for those toughest jobs.

Makita also produces and markets a wide array of specialty power tools designed to accomplish any chore, from shop cleanup to yard work. Some of the most popular of these tools include shop vacuums, battery-operated lawnmowers, chain saws, and leaf blowers.

Even though they are their top sellers, not all of Makita’s tools are battery-operated. The company also manufactures an assortment of pneumatic and gasoline-powered equipment. From air compressors to chainsaws and hedge trimmers, Makita offers the consumer a variety of products to fill their every need. 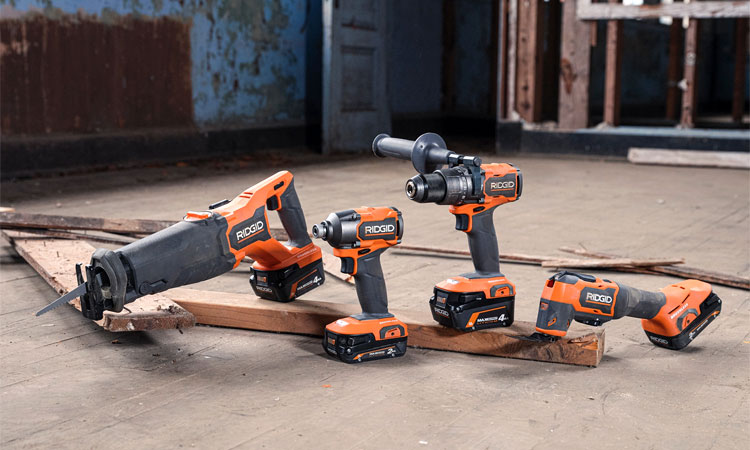 The first time Ridgid entered the power tool market was in 2003, when they launched their all-new battery-powered tool line. Despite not keeping up with some of the more well-known tool manufacturers, they have continued to expand their line of power tools for almost 20 years.

The company’s best-known product line is their 18V brushless portable power tools which includes anything from drills to heavy-duty impact drivers, all of which having several variations. Despite Ridgid’s lower level of marketing when compared to bigger name brands, customers continue to purchase their tools due to their reputation.

Ridgid has also released a line of subcompact cordless power tools for the tradesman who must occasionally work in tight, confined places. These are half the size of their big brothers in the normal line. The same 18V battery is used in these little workhorses as in the full-size versions.

While the company may be best known for making high-quality pipe wrenches, it also produces a wide range of hand tools and corded and cordless power tools.

Makita and Ridgid have both served as innovators within the modern power tool industry, constantly striving to produce the newest technology. This desire to forge a path all their own, has made it possible for Makita and Ridgid to both stay competitive in the sizable power tool market.

The following are several of the most innovative technical systems pioneered by Makita and Ridgid. 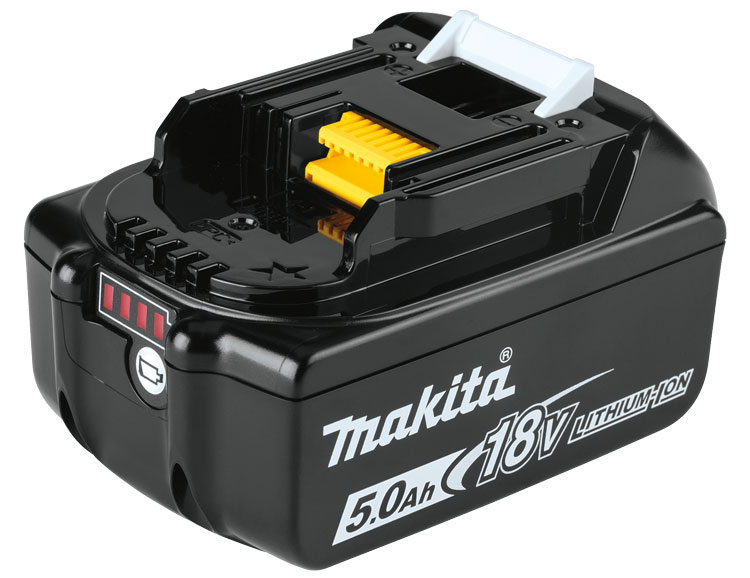 Makita’s 18V batteries and chargers feature the company’s proprietary Active 3 Control Technology. This technology allows for communication with any Makita 18V battery and its charger.

The chargers are capable of monitoring a battery’s voltage, temperature, and current, thus increasing charging efficiency and resulting in greatly reduced charging time.

Makita’s newest line is the XGT 40V | 80V max system of cordless equipment and tools. This line of tools is optimized to produce optimum power for those heaviest workloads but doe not sacrifice runtime.

The XGT 40V battery may be doubled to give increased power and performance to XGT cordless tools and equipment. Makita currently has 50 products in its XGT line from drills to masonry tools to outdoor equipment

Makita’s newest line of battery-operated impact drivers now features the company’s Quick Shift Mode. Makita impact drivers have been developed to have an automatic electronic controller that downshifts and reduces rotation and impact speed just prior to driving the screw into place.

Ridgid’s Hyper Octane Batteries were a major breakthrough in power tool automation. These batteries are Bluetooth compatible, allowing users to keep track of the health of any machine powered by the Hyper Octane Battery. Tool owners may also use the same technology to track expensive equipment for inventory purposes.

Ridgid has the tool for you if you’re a plumber or anybody else who works on pipes in confined spaces. Ridgid’s comprehensive range of battery-powered, compact pipe equipment will meet your tight space demands, from crimpers to cutters.

Customer service and a company’s warranty are some of the main considerations when a consumer is looking to make a purchase.

Before deciding which brand to spend your hard earned money on, read on for more information about Makita and Ridgid’s policies. 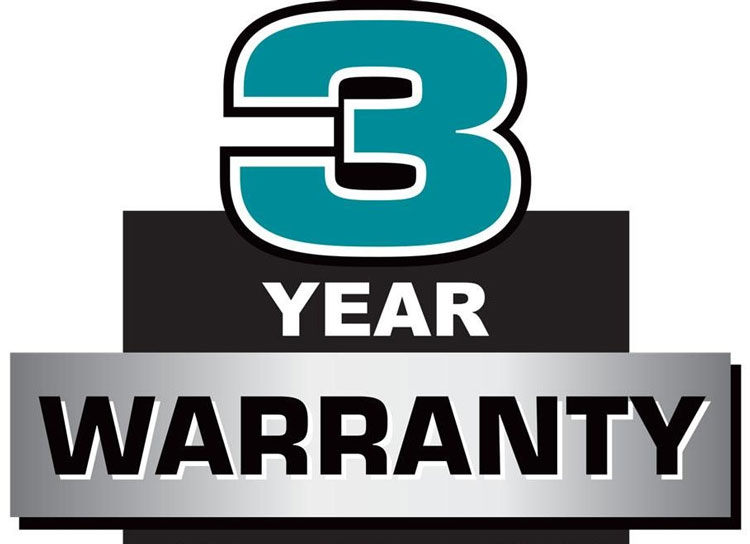 Makita backs every tool from defects in materials and workmanship with a 1-year limited warranty from the original date of purchase. The consumer simply returns the defective tool to an authorized service center and repairs will be conducted free of charge.

Simply return the tool to a Makita factory or service center, and if it is found to be faulty due to the above reasons, Makita will repair or replace it at no cost to the consumer.

However, consumers should be aware that warranties provided by Makita do not cover in the case of normal wear and tear, misuse, or attempted repair by a non-authorized service center. Lithium-Ion tools that have damage due to the use of a non-genuine battery will not be covered.

Makita’s also offers a 30-day satisfaction guarantee. If for any reason, you are dissatisfied with a power tool purchased, simply return it within the first 30 days and Makita will replace the tool or provide a full refund of the purchase price. 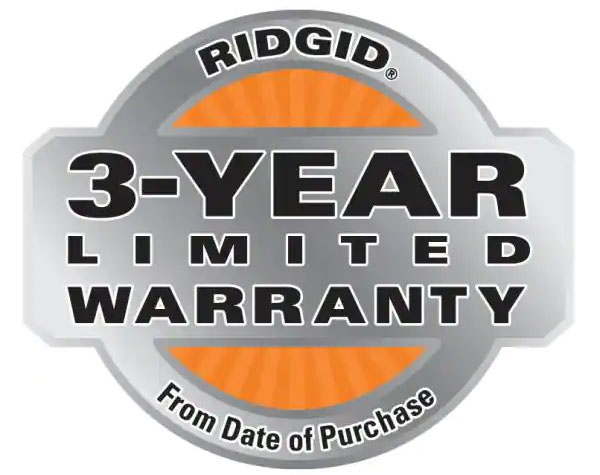 Ridgid power tools come with a three-year limited warranty. The tool is covered for any flaws in workmanship and material at no expense to the customer.

Ridgid offers a lifetime service agreement in addition to this warranty. If you register the tool within the first 90 days of ownership, Ridgid will replace batteries and parts and any service cost for free.

Specific products carry their own warranty. These include:

And The Winner Is…

Makita and Ridgid are both powerful names in the power tool market, and each have a dedicated following of consumers. However, when comparing apples-to-apples, we feel as if Makita carries a slight advantage over Ridgid, for several reasons. This is perhaps most evident when comparing each brand’s product offerings.

Makita manufactures a diverse line of tools from heavy-duty impact guns and drills for the workplace, to home maintenance tools such as electric lawn mowers and weed eaters. The company also produces a number of craft-specific tools, such as electric grease guns and concrete and masonry tools.

Ridgid’s lines of tools simply can not compare. However, Ridgid does have a more extensive line dedicated toward plumbers and electricians.

Makita power tools are generally regarded as some of the toughest equipment on the planet, even finding their place within the tool boxes of home owners and tradesmen alike.

For these reasons, we must give top honors to Makita in this competition.