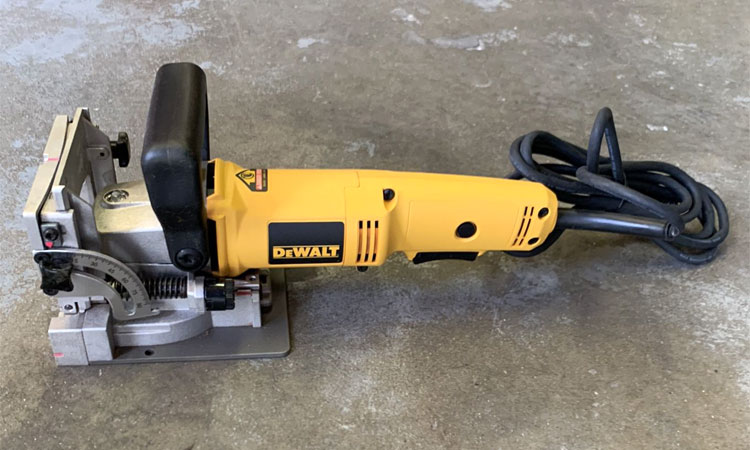 Note: This post may contain affiliate links. This means that at no cost to you, we may earn a small commission for qualifying purchases.
44 shares

Biscuits and dominoes are both highly favored for constructing furniture. While dominoes are stronger overall, a wood biscuit cutter tends to be cheaper and provide enough strength for most woodworking projects.

The best biscuit joiner (plate joiner) not only takes into account power, durability, and design, but it must also be a good value. You can’t go wrong with any of the following tools for both biscuit and domino work.

Our 6 Favorite Biscuit and Plate Joiners 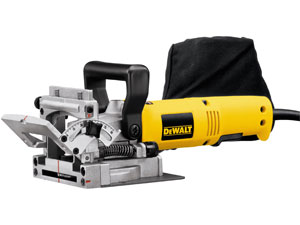 DeWalt has a reputation for top-quality tools, and this plate joiner is no exception. Durable and easy to use, the 6.5 Amp, 10,000 rpm motor can handle both soft and hard woods with little or no effort. The fence is a single piece, allowing adjustments up to 90 degrees, and flush cuts can be made with the guard still in place.

Customers love the ergonomic design and affordable price of this plate cutter. The ability to switch between biscuit sizes quickly and clamp the joiner when doing stationary work adds even more appeal.

Another common praise from users is how quickly they can perform an accurate cut with very little effort. Finally, the price is much lower than other models of similar quality, making this a favorite of users working on a tighter budget.

One complaint about the DW682K is the issue of clogging when cutting certain woods, such as oak, too fast. The passage to the dust bag may be kept from clogging simply by cutting these hard woods slower.

The other common complaint is that while the tool is easy to use, it can take a bit of time to learn if you aren’t familiar with biscuit cutters. A number of videos on YouTube (here’s a good one) and other online tutorials make this a much simpler process, as does practicing on scraps while you learn the basics. 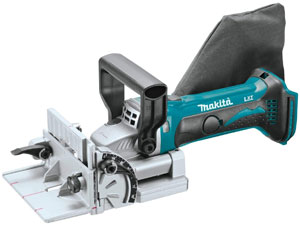 Those in search of a heavy-duty and extremely portable biscuit joiner will find a lot to like in the Makita XJP03Z. This joiner features a rack-and-pinion vertical fence system that is engineered for accurate fence adjustment between 0 and 90 degrees (with positive stops at 0°, 45°, and 90°).

Arguably the best cordless biscuit joiner, the Makita weighs in at only 7.6-pounds and provides up to 320 cuts or 160 joints on a single charge of the battery. It cuts up to a 19mm depth and runs at 12,000 RPM (no load).

While it is certainly true that there are a number of cheaper plate joiners available on today’s market, one can easily justify the expense associated with this particular model. Makita carries a superb reputation for excellence and is known for producing tools that are more than capable of withstanding the test of time. 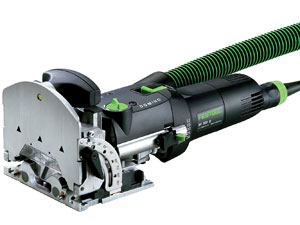 If you require stronger bonds than what a typical biscuit join can offer (and you have the budget for it), it’s hard to beat a Domino joiner. Festool is a company that has a reputation for quality, German-made tools that last. This DF 500 Q combination set puts the competition to shame with easy alignment, a 90-degree pivoting fence with positive stops at 2.5, 45, and 67.5 degrees.

It is specially designed to create a perfect cut every time, and its indexing pins help to get an ideal initial alignment. Finally, the joiner removes dust from the cutting area as you go, making it easier to get a solid adhesion during assembly.

Users rave about the quality and speed the DF 500 lends to projects. They note that the joiner takes far less time than many other models and is so accurate that even dry-fit dominoes are difficult to remove.

The durability of the joiner means long-term savings on repairs or replacements, and it easily connects to your shop vacuum for efficient dust removal.

Finally, owners of this product note how easy it is to adjust the cutting depth to accommodate any of five different domino sizes.

The deciding factor for many consumers when choosing between a biscuit joiner and Domino joiner is the price. Unfortunately, the Festool DF 500 Q is a prime example of this dilemma, with a hefty price tag that prevents it from being the best on this list.

Those who do purchase this excellent alternative to a biscuit joiner note that the purchase is a long-term investment that pays for itself. However, many potential users have cited the cost as their one reason for avoiding this product. 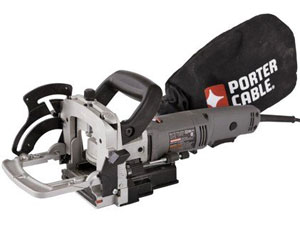 This biscuit cutter tool features a fence capable at tilting up to 135 degrees with a positive adjustable stop located at 90 degrees, seven cutting settings to handle a variety of woods, and four-inch blade with the option of using a two-inch blade for smaller cuts. As a kit, this set also includes a centering plate, spanner wrench, chip deflector, and dust bag.

The relatively low price tag and highly-adjustable design have been popular highlights among consumers. Users frequently comment on how easy the Porter-Cable is to use.

They also appreciate the extras included in this kit, although many prefer to connect the joiner to their shop vacuum instead of using the dust bag to avoid the occasional need to empty the bag out during long projects.

While this product has been noted for very high quality construction in past, some recent users have complained that the fence pivots are made of plastic and prone to problems. These problems range from alignment issues to breakage.

See Also: 19 Types of Hand Planes and Their Uses

Other consumers have commented that the hex bolt used to keep the blade in place is so tight that it tends to strip when attempting to change blades. This may be remedied by using a wrench to loosed the underlying washer first, but the manual and other documentation fails to point this out.

Finally, some owners of this product have complained that Porter-Cable blades are of lower quality than other brands and have chosen to replace then with blades by DeWalt or Mikita.

WEN makes some excellent lower cost power tools and their JN8504 plate joiner is a great example. It’s a good choice for any DIYer of hobbyist looking to simplify the chore of making accurate biscuit cuts for reliable miter joints.

This joiner features a powerful 8.5 amp, 10,000 RPM motor and will cut up to 14 mm deep. Additionally, the WEN joiner is equipped with an adjustable fence and dust port with a dust bag for easy cleanup.

Some users have stated that this model is considerably louder than other joiners they have used. While this might be a more serious issue for professionals or those with not-so-understanding neighbors, this joiner is still likely one of the better options for budget-minded hobbyists. 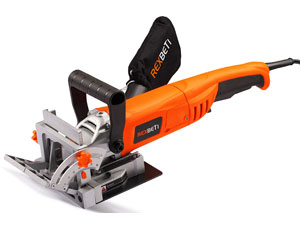 If you are in search of a do-it-all style plate joiner but want to keep your budget low, then it would be hard to go wrong with the Rexbeti REX031 kit. This joiner features a powerful 10,000 RPM motor, allowing it to smoothly cut through various types of hardwood.

An easy to set fence depth and angle make this a great tool for even a beginner. The 100 included biscuits in three common sizes means you can get started as soon as you unpack the product.

How Does a Biscuit Joiner Work?

A biscuit joiner, also commonly known as a plate joiner, is a woodworking power tool designed to allow multiple pieces of wood to be fit together. This tool relies upon the use of a small saw blade, which cuts a small hole referred to as the “mouth”. This cut, likewise, will be made in an adjoining piece of wood.

With holes cut in both wooden panels, an oval-shaped key, known as a biscuit, can be inserted and glued into the above mentioned slots. The adjoining boards are then clamped together, where they will remain until all glue has dried. 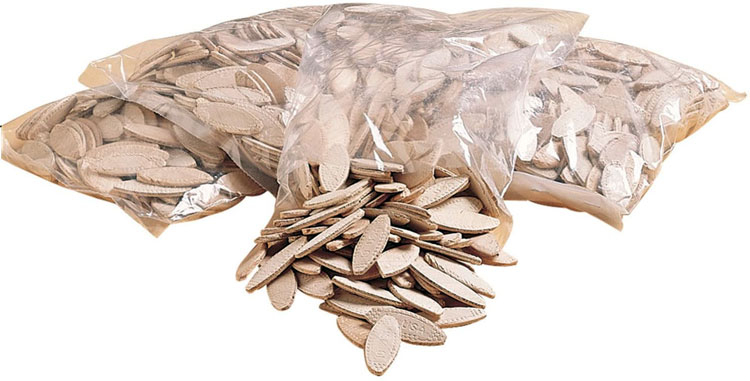 Are Biscuit Joiners Worth It?

Biscuit joints are by far the simplest way to align and assemble interlocking boards, to form joints that would otherwise lack the necessary strength to exhibit any level of durability.

If you anticipate a need to quickly and efficiently assemble joints of this nature, then a biscuit joiner is the way to go.

Are Biscuit Joints Stronger Than Dowels?

Simply put, biscuit joints are not as strong as those joints formed with the use of dowels. This is due to the fact that biscuits are more heavily used for the sake of proper alignment, rather than to provide substantial strength.

Therefore, comparing biscuit joints and dowels is somewhat like comparing apples to onions. Neither of these tools was designed to accomplish the same task.

Biscuit joints also tend to be much simpler to create than those using traditional dowels. In fact, biscuit joints can be made in a matter of minutes, thereby saving a tremendous amount of time and effort.

This proves especially valuable in situations where outright strength is of little importance. Though dowelled joints tend to be far stronger, sometimes this level of strength is simply overkill.

When choosing whether or not to purchase a biscuit joiner, you must first consider the type of projects that you intend to complete.

If you are planning to build furniture or other heavy fixtures, dowel joints will likely prove superior. However, if you are framing up storage cubbies or building ornamental accessories, a biscuit joiner should prove to be a worthy purchase.

Though biscuit joiners and domino joiners serve a similar purpose, they go about the chore of interconnecting two individual pieces of wood, in differing manners. Each type of joiner serves a specific purpose and is best suited to a particular task.

The following are the most significant differences between biscuit and domino joiners.

Despite their differing names, a biscuit joiner and plate joiner are essentially the same tools.

Both are designed to cut a crescent shaped hole, into which a flat wooden oval, or biscuit is glued and inserted. Opposing boards are then clamped together until a sturdy bond is formed. Simply put, the term “plate” joiner, is just another name for a standard biscuit joiner.