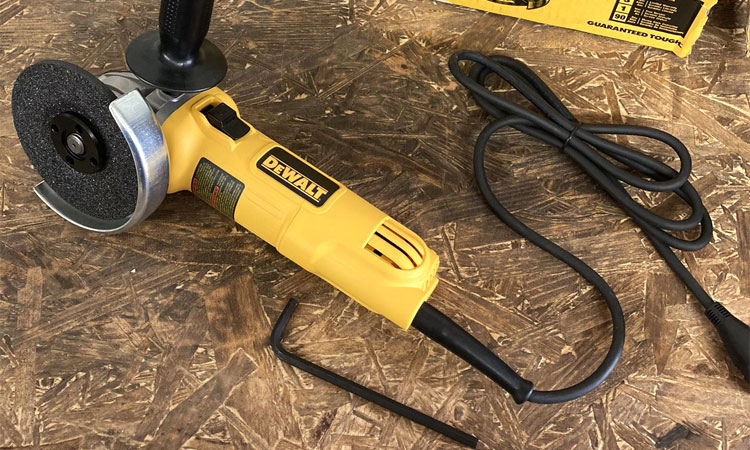 Note: This post may contain affiliate links. This means that at no cost to you, we may earn a small commission for qualifying purchases.
10 shares

With so many different models available, finding the best angle grinder for your purposes can be a chore. Typical angle grinder reviews are often full of pros and cons describing how a model made for an excellent metal grinder but was terrible at cutting cement or brick, for example.

Another annoyance is balancing cost and quality. Unlike many types of tools, a cheap angle grinder may be superior to more expensive models, or it may be a complete waste of money.

A good angle grinder must be able to balance several features. Safety is always a concern, as is having the right amount of power for the job. Size, additional features, and whether it you are restricted in replacement parts also play a major role.

Here’s what we recommend in the most commonly used 4.5 inch wheel size. Continuing a tradition of excellence, the DWE402 by DeWalt contains an 11-amp, 11,000 RPM motor making it one of the most powerful 4.5-inch wheel models you will find.

This 12-inch long angle grinder features a dust ejection system which removes dust and debris to provide more durability. It also includes a One-Touch guard, wrench, and two-position side handle.

The DWE402 is the perfect example of why professionals and those in metal working schools consider DeWalt the standard for angle grinders.

Because of DeWalt’s reputation, users have high expectations of this product, and few have been disappointed. In fact, the majority of those who have purchased this tool had stated that the DWE402 either met or exceeded their expectations in every way. The overall design is one which has been around for a long time, and is both sturdy and reliable. You’ll be pleased by the extra torque and power of this model, which will allow you to complete projects in a fraction of the estimated time.

The four and one-half inch wheel diameter is the sweet spot as far as most angle grinders go.

This size provides a decent size grinding surface with good control for better precision than units with larger wheels. The DeWalt branded discs have proven more durable than most other brands.

There are very few complaints about the DWE402, the biggest of which is the weight. At 6.2 pounds and 12 inches in length, it tends to be more steady than lighter models, although the heavier nature than some other corded models makes it less useful in smaller projects.

A related complaint comes in the form of power, as this tool is designed for standard to some heavy-duty use, and not for small precision jobs.

If it’s the later you’ll mainly be using it for, you may want to instead look at the Makita below. Otherwise, you really can’t go wrong with the excellent bang for your buck DWE402. When looking for the best hand grinder, the 9557PBX1 should be on your short list. Unlike larger models, this compact, well-balanced, 7.5 amp lightweight model weighs in at only 4.5 pounds and has numerous features to make your life easier.

The body is designed to seal and protect the internal components from dust and debris, adding to the tool’s durability and lifespan. It also features a large paddle switch with a lock that keeps the grinder in either the on or off position.

As an added bonus, the Makita grinder kit is shipped with multiple 4.5-inch grinding wheels, a diamond wheel, and a padded aluminum carrying case. It’s arguably the best bang for your buck angle grinder that you’ll find.

One of the features users love most is the pairing of a body-length paddle switch and middle-mounted latch.

The latch prevents the tool from accidentally turning on when not in use, while the size of the paddle switch means you can hold the grinder in a variety of positions without it shutting off.

The extra included discs are all highly durable, and the grinder itself will outlast most grinders of comparable price. Finally, the inclusion of a sturdy, padded metal case proved a welcome bonus for many buyers.

This model has a large consumer base, ranging from DIYers to industrial factories. As the needs of these users can vary immensely, the mostly-positive feedback is tempered mainly by minor issues.

The only complaint which has been made on several occasions revolves around temperature. Despite the use of thicker, more tightly wound coil wires, the tool can begin to overheat when used for particularly difficult jobs.

This drawback will mainly affect heavy duty uses and has not been reported for simple to average projects. If heavy-duty use is your thing, you might want to go with either the DeWalt (above) or Metabo (below) grinder instead. Metabo is a well-respected tool brand by those in the industry and this surprisingly balanced angle grinder was designed with stone in mind.

As such, the 13.5 Amp/1,550 Watt, 2,800 to 9,600 RPM motor provides up to 50 percent more torque than the competition for quicker removal, up to 20 percent overload capacity with overload protection, and soft start to aid in pre-cut positioning.

A variable speed dial and superior air flow design keep the grinder running at an optimal speed without overheating, while the S-Automatic safety slip clutch prevents kickback in the event of a jam.

Unlike most other angle grinders out there, the verdict on the WEV15-125 HT is almost unanimously positive.

It’s powerful, it has an incredibly long lifespan (15 to 20 years and still working like new isn’t unheard of), and has the ability to upgrade to a six-inch disc size. These things together make it possibly the best heavy duty angle grinder out there.

A few users have had issues with the variable speed control breaking. While the tool still functions, the reason for this control breaking is unknown, especially since reports of breakage vary from a few weeks to a year or more after purchase. As far as portable models are concerned, the 2780-20 is arguably the best cordless angle grinder on the market today.

It uses Redline Plus intelligence to let you know when the lithium XC 4.0 battery needs recharging. Changing discs is a tool-free experience, making this highly durable tool easy to work with on the go.

The overall design of this angle grinder is pretty solid. It works quite well on small jobs and is highly portable, making it perfect for removing rust from tools or doing some quick tool sharpening.

It’s also more powerful compared to a lot of other battery-powered grinders on the market. It’s a well-known fact that the Milwaukee 18V Fuel lineup more often exceeds competitors’ 20V tools as far as power and battery life is concerned.

While corded angle grinders are still used more often than cordless variations, technology and price continues to improve. Power output is approaching that of corded models and the portability factor is huge but battery life is still an issue.

Thus, it can be a tough call whether or not this tool is worth it for contractors or other individuals that need a tool capable of handling a long day’s work. As with the Milwaukee above, sometimes you need a more portable grinder, and DeWalt has answered that need with the DCG412B cordless angle grinder.

The ability to take a power tool anywhere without having to handle cords is usually tempered by a loss of power, but not the DCG412B. Once you try it for the first time, you’ll be amazed how well a cordless model can perform.

The compatibility with other DeWalt 20v MAX tools makes it easier to keep on working when the included battery has been drained. Users frequently comment on the high durability of this model both in home garage and industrial settings.

The biggest complaint about the DCG412B is the same thing that consumers love most about it – the battery. While this grinder will compete with the corded competition on equal ground, the battery will peter out after 15 to 20 minutes of intense usage. Like any other cordless tool, it’s a good idea to have a spare battery on hand.

The bearings are also noisier than some corded alternatives, so this is not the best tool for night work. If you already have a any other tool in DeWalt’s 20V line, you’re fine with purchasing just the bare tool, but otherwise you’ll need at least one battery and a charger.

While slightly more expensive than most corded models, the DCG412B truly is one of the best cordless angle grinders you can buy. An overmolded handle is designed for more comfort while the 3-position side handle make control easier. For safety and stability, the PCC761B also has a cast-metal gear housing and tool-free adjustable guard.

This grinder does pretty well cutting sheet metal and can make several cuts quickly and efficiently.

It works really well for smaller tasks, and the battery used is one you likely already have if using other Porter Cable cordless products.

While this tool is generally sold as “bare”, it actually includes everything but a battery and charger, making it a lot more cost-friendly than it first appears.

As with other battery-operated angle grinders, don’t expect to be chewing through stacks of rebar with this tool. Be warned that it can also overheat easily when using a single battery for heavier chores, so it’s best to keep a charged spare or two on-hand.

Getting to Know Angle Grinders 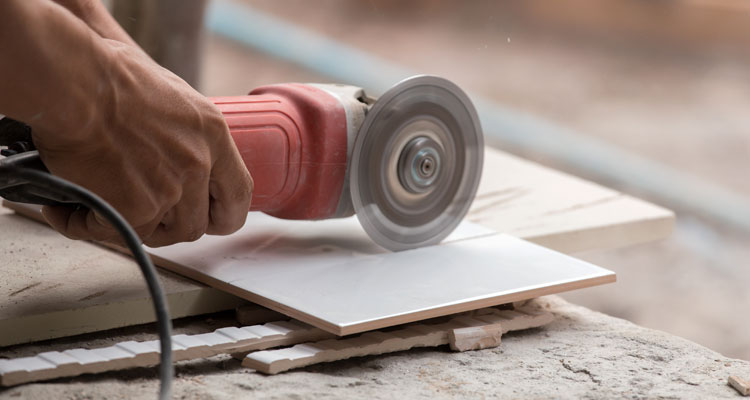 It may look like a simple device, but there are so many common angle grinder uses that it’ll quickly replace many of your cherished tools. The more you know about them, the better your choices will be when picking one out.

Here are a few things to consider when shopping for an angle grinder.

Features to Look For When Buying

Because of the versatility angle grinders provide, you’ll want to fine tune your purchase to fit the needs of your workspace. Generally, there are eight different factors worth considering:

Angle Grinder vs Cut Off Tool

These two tools serve a similar basic function but can be vastly different beyond the most basic points.

Cut off tools are limited to cutting, which they do quite well. They’re lighter and able to function one-handed.

The blade is perpendicular instead of angled (similar to a rotary tool like a Dremel), making it easier to use for some projects. It’s smaller and cheaper, which is why it’s a good choice for many DiYers and professionals.

Conversely, angle grinders have far more power and can make some pretty delicate cuts in skilled hands. It has far more versatility and can often tackle projects that would require several tools otherwise.

The higher cost pays for itself by eliminating the need for numerous cheaper tools and can offer more control when using models with adjustable handles and guards.

Another case of “which is more important,” angle grinders and die grinders have a similar base function but are very different upon closer examination.

With the majority of die grinders being pneumatic, they are smaller, lighter, and almost twice as fast as an angle grinder. They’re perfect for high precision work or getting into tighter spaces.

But the bigger, heavier angle grinder provides far more power and more options for power and attachments. It isn’t limited to grinding, and the variable disc size means it can handle both large and small scale tasks (albeit with a bit less precision).

Thus, one might consider the die grinder to be a finishing tool when used in conjunction with an angle grinder.

1 thought on “6 Best Angle Grinders for Cutting and Grinding”