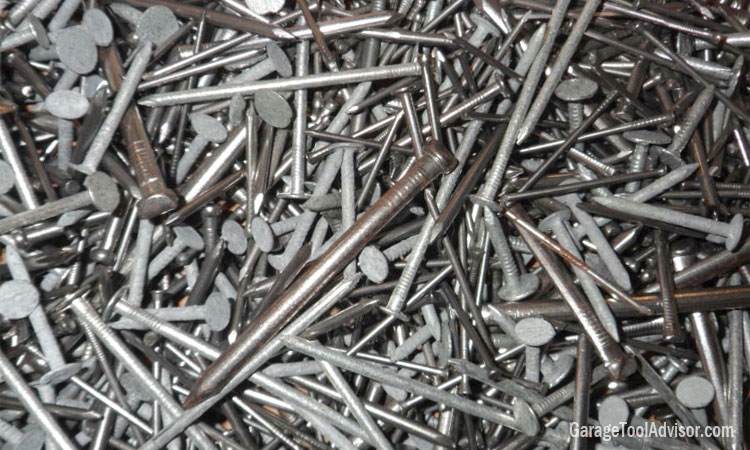 Note: This post may contain affiliate links. This means that at no cost to you, we may earn a small commission for qualifying purchases.
16 shares

Most every craftsman understands the true value of the nail. However, far fewer realize just how many types of nails actually exist. Of these types of nails, many vary significantly in size, shape, and composition.

Likewise, these nails also differ in their intended uses. This places increased importance upon familiarizing yourself with all current market offerings.

In order to make the most out of any project, one must be capable of choosing the perfect nail for the task at hand. While this might seem somewhat confusing at first, proficiency in such a matter is quickly gained with a little experience.

The following are a number of today’s most commonly used nails, as well as a general description pertaining to the uses of each.

Parts of a Nail

Nails come in multiple shapes, each with its own purpose.

The shank is the middle part of the nail that is instrumental in providing strength. There are several different types of nail shanks.

A nail’s point is its sharp outer tip, which is instrumental in penetrating wood surfaces.

Related: 8 Parts of a Hammer

A nail’s external finish or coating helps determine what projects it is best reserved for use with. Steel is the most common material used in nail construction, but is also susceptible to corrosion.

Steel nails that will be used in decking or other areas that come in contact with moisture, need to have a corrosion resistant coating. Meanwhile, bright nails consist of untreated steel, and are suitable for interior use only.

Like a typical claw hammer, a common nail can be utilized for everyday projects, such as construction work, framing, and woodworking projects. This type of nail features a round head and sturdy shank that provides substantial strength.

The common nail is best reserved for jobs where strength is more important than the appearance of the nail.

A box nail has a similar design to the common nail. However, the shank of a box nail is narrower. This means that box nails do not possess the same level of strength as that of the common nail, and are not appropriate for major structural jobs.

The smaller diameter of the shank does reduce the probability of splitting the wood when driving the nail.

Brad nails are a smaller variety of finish nails. They are ideal for more precise woodworking and craft work, but do not possess the same holding strength as a finish nail.

Brad nails have heads that are only slightly bigger than the diameter of the shaft of the brad. Often brads are installed using a pneumatic nail gun.

Finishing or finish nails are quite often used in carpentry and cabinetry work, where there is a need to conceal the nail used. They have small heads that can be countersunk below the surface of the wood with the use of a nail set, thus making them an excellent choice for molding work.

The finishing nail features a small diameter shaft, which reduces the risk of splitting.

Sinker nails are typically used for framing and general construction jobs. These nails feature checkered heads that prevent the framing hammer from sliding off while driving.

Nails of this type are designed to be driven flush with wood surfaces. Sinker nails also have vinyl covered shanks that provide lubrication for easier driving and increased holding power.

Due to their corrosion resistant composition, deck nails are the preferred choice for use with treated lumber. Deck nails customarily have checkered heads for better contact with the head of a hammer.

Drywall nails are designed specifically for the job of installing drywall. They have large round heads that are designed to be countersunk for concealment, and minimize the possibility of tearing drywall board.

Drywall nails also feature long diamond shaped points, which reduce the splitting of wall studs. Drywall nails are available with both smooth and ringed shanks, the latter of which enhances holding power.

Flooring nails are designed to be used in pneumatic nail guns, for the purpose of  installing wood flooring. They are available in 16, 18, or 20 gauge sizes, which allow for flooring expansion/contraction, and greater holding power.

The higher the gauge number, the thinner the nail, and the less likely splitting becomes.

Framing nails, like common nails, are generally used for larger framing and craft projects, where superior hold and strength are necessary.

These nails are commonly used in framing nail guns, and come in a variety of shank and head configurations for use with specific nailers. It is commonplace for framing nails to be driven flush into the wood.

Roofing nails are intended for securing asphalt shingles, roof felt, roof decking and sheathing. These nails are exposed to the elements so they generally are made of aluminum or have corrosion resistant finishes.

Oftentimes, roofing nails feature a gasket under their larger than normal nail head to create a weather resistant seal.

Cut nails are quite robust, and are often used in a nailing machine for easier handling. Nails of this configuration are often used when installing flooring.

These nails are cut from a steel plate, leaving a distinctive wedge shape that is quite unmistakable. Cut nails are known for providing an impressive grip that is highly sought after in the flooring business.

Duplex nails are essentially two nails in one. They are used for temporarily constructing scaffolding, or forms for concrete projects.

They are designed with two heads along a central shank. The first head secures the nail against the wood, while the second head allows for easy removal.

Masonry nails are designed to fasten wood to brick, concrete block, and mortar. They are constructed of hardened steel with longitudinal grooves along the length of the nail’s shank, to assist with penetration of very hard materials.

Concrete nails are made of high-carbon hardened steel, and feature fluted shafts that help them easily sink into concrete. These nails are driven through boards into the concrete below.

Typically nails of this type are cheap and hold well, as long as at least 3/4 inch penetrates into the concrete. Concrete nails are shaped like thick common nails, and are extremely hard to pull out.

Siding nails often have small heads, so that they are extremely difficult to see after installation. These nails feature a ringed or spiral shank for extra holding strength.

Joist hangers are brackets used for adding strength and rigidity to connections. These connections will have wood pieces meeting at a 90-degree angle. In most cases, they are used in major construction with joists and trusses.

Weatherstrip nails come with a sharp point combined with a barbed shank. These two features make it easy to securely install the nail into position. They are most commonly constructed of copper because such material can hold up quite well against different weather conditions.

Pole barn nails are constructed with ring shanks for holding strength and a corrosion resistant finish for compatibility with pressure treated wood.

These types of nails are for construction projects that use wood poles set in the ground to form the foundation of the structure. They are commonly found in sizes ranging from about 4 to 8 inches.

Connector nails are designed for attaching structural hardware such as framing angles and rafter ties. They are used in nailer guns for installing joist hangers, straps, framing anchors/ties, and seismic/hurricane ties.

The heads are generally marked for easier nail identification during inspections and are designed to reduce nail bending when driven into hardware.

Cap nails are used to attach roofing felt, house wrap, tar paper, and insulation foam board. Unlike galvanized nails, a cap nail has a steel spiral shank that helps keep the fastener in place and a large polyethylene cap to prevent leaks.

Trim nails are designed for exterior use on homes. They secure home gutters, fascia, and soffit board as well as exterior trim. They are generally of a galvanized composition to withstand the elements.

Pin nails are used for delicate fastening jobs and are the thinnest and shortest of all finishing nails. These nails come in strips and are installed in a nail gun. They have a very small diameter (23 gauge) and no head, so they leave a very small entry point.

Annular ring shank nails are commonly used to hold clapboards or shingles in place on home exteriors. These nails are most commonly of a galvanized construction.

Annular ring nails are thin nails, lined with rings for added holding power, and are resistant to rust.

A tack nail is a short nail with a wide, flat head or round head that is used for fixing carpets to floorboards and for stretching fabric onto wood. The lightweight nail is also commonly used for cabinet-making and for fixing small moldings into place.

The rounded head tack nail is used frequently with upholstery.

Panel board nails have small, round heads and are used for fastening wall panels to studs or furring. They’re often available painted in different colors to match the panels you’re installing.

It has a ring shank for greater holding power in medium and soft woods.

Furniture nails or upholstery tacks are small nails with relatively large, decorative heads. They have two functions, to adhere upholstery to wood and to be decorative.

Spiral shank nails turn as they are driven into wood. Due to the spiral shank design, they work like wood screws in the sense that they thread into the fibers of the hardwood as you drive them.

These nails are also designed to handle the dense materials better thanks to the use of reinforced steel. They are commonly used for squeak-free hardwood flooring and decking, siding, or in framing that is susceptible to high winds and moisture.

Rose head nails are a solid steel forged nail that is good for framing, face nailing, scaffolding, and soft wood floors. They get their name from the hammered head that often resembles rose petals.

The forged look is desirable when you are seeking an antiqued look for the piece you are using them on. Quite often rose head nails are used in furniture repair and cabinetry due to this appearance.

The nails come with quite an outstanding durability plus holding power.

A hammer drive pin anchor is used mostly for light-duty fastening activities and is quite versatile. They are installed by pre-drilling a hole and then striking the pin anchor with a hammer, thus driving the nail into the anchor body, expanding the anchor to form a tight fit.

Hammer drive pin anchors are used in such materials as brick and concrete and tend to be of a permanent application.

Nail sizing originated in England. Sizes of nails were named for how much it would cost to buy 100 of them in the same size. If 100 nails cost four pence, then the nail size was termed “four penny” nails.

In modern day, nail sizes correspond with the nail’s measurement for the head to the tip of the point. However, nail length is still indicated by the letter  ‘’d”, as a throwback to the use of “penny” in earlier days. Each increase in the nail size corresponds to a ¼ inch longer in length.

These are the common nail sizes and their corresponding length:

Note: Once a nail reaches a length of 6 inches or more, it is generally referred to as a spike.