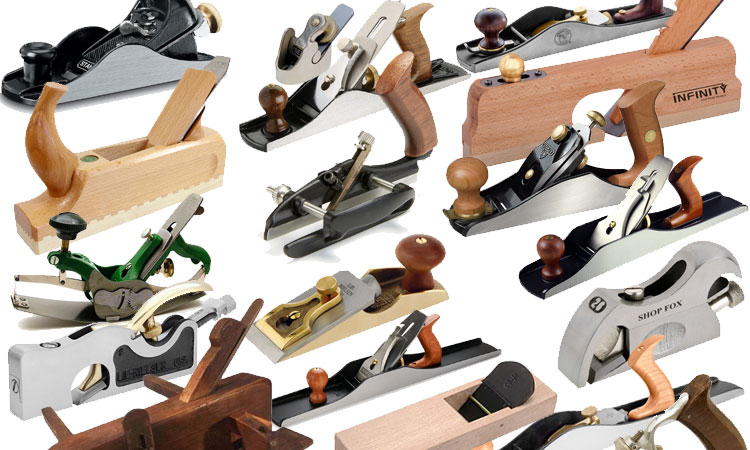 Note: This post may contain affiliate links. This means that at no cost to you, we may earn a small commission for qualifying purchases.
292 shares

In an age where powered tools are taking over, it might come as a surprise to find the humble hand plane still in high demand. However, one look at the sheer power of traditional Japanese carpentry and the precision of a well-maintained kanna (Japanese plane) is all it takes to prove why this simple tool is so essential to the dedicated craftsman.

Hand planes come in a wide range of shapes and sizes, although they tend to follow a basic visual similarity (unlike other tools, such as wrenches, drills, and sanders). However, the minor differences lead to a surprising number of specialty uses.

Let’s take a moment to look at 19 different types of hand plane, what the differences are, and how they’re used. An entire class of hand plane, bench planes tend to measure from a humble five to impressive 30 inches long and are the major workhorse in the hand plane family.

They feature blades which sit bevel side down on a pitch of 45 degrees. These are reinforced by the cap iron, which also serves to keep the mouth from clogging.

Bench planes are numbered and an entire article could be written on the differences between each individual numbered size. However, there are some common types of plane which are considered types of bench plane, most notably the fore plane, jointer plane, and smoothing plane.

Note: The term “bench plane” is often applied to bench-mounted electric planing devices, as well as sometimes being used as a synonym for hand planes in general. As such, it can be a very confusing topic for even experienced craftsmen. Our usage of the term and yours may vary.

Generally considered the DIY go-to for its low cost and compact size, a good block plane can work wonders. They’re designed for cutting end grain, shaping, and chamfering; and can be used one-handed, making them excellent finishing tools.

Between the cost and quality, this is one hand plane you’ll likely find in most workshops. The bull-nose (alternately spelled bullnose) plane has a body and sole designed at 90 degrees. They measure a mere three to 4-1/2 inches in length and have blades slightly wider than their bodies.

A bullnose plane is designed to finish rabbets, and the low angle of the blade allows it to cut both end grain and along the grain.

It gets its name from the metal “nose” that creates a natural stop in front of the blade. For this reason, it’s best used on rabbets that don’t extend the full length of the piece. Some models are adjustable, and some have a removable nose.

In all cases, the tiny size also makes this tool useful in detail work.

Chisel planes are a special type of plane that lack any form of guard in front of the blade. This allows them to get right up to the edge of a cut and clean where other planes cannot reach.

They’re also the most commonly kitbashed plane due to their simplicity. One of the downsides to many specialist tools is the fact that the amateur craftsman cannot afford the full set. While not very common, combination planes have an interchangeable cutter, allowing it to perform the tasks of many more specialized tools, such as rabbet or molding planes. One of the more unusually designed planes, the circular plane has a curved sole which is often adjustable. This allows you to use the plane on curved surfaces and details.

While it might take a little getting used to, these planes can smooth surfaces straight-soled planes can’t fit. No, this tool isn’t for making your knuckles straighter. Instead, this is a highly specialized, small plane used in crafts such as violin making to clean up after gluing joints.

They cannot be adjusted, although you’ll find a variety of flat and curved soles in an artisan’s workshop. As they’re used mainly for thin boards, the blades tend to be a very narrow width. Measuring 14 to 20 inches long, the fore plane is usually the first hand plane to hit a rough board. It removes material quickly and the length allows it to partially straighten the piece.

It is also considered one of the largest types of bench plane.

At 12 to 17 inches long, jack planes are one of the most versatile types of plane making them live up to their “jack of all trades” nickname. They’re great for removing warps and twists, as well as truing long boards.

These tools are sometimes used as a substitute or for a catch-all when tools are limited.

The longest planes in the bench plane family, these massive hand planes range from 22 to 30 inches in length. The long sole length makes them perfect for straightening jobs.

When working in order, the jointer is actually the middle bench plane in the great trifecta. The pinnacle of carpentry, the fine art of Japanese woodcraft relies heavily on the kanna. These are very simplistic hand planes, consisting only of a Japanese oak body, blade, and chip breaker pin (which holds the blade in place). A simple mallet tap is used to adjust the blade.

As with Japanese pull saws, the kanna is used to cut on the pull stroke, which allows for superior control. Once mastered, their accuracy is hard to match by even the best Western tools.

Note: These tools are cared for almost religiously, and a Japanese woodworker sharpens and cleans his kanna at the beginning of every day, allowing these fine tools to be passed down for generations while being just as precise as the day they were built.

Designed for flattening out long surfaces and straightening edges, this class of hand planes includes those that are long and wide. This allows them to not only cover more area, but keep a much straighter cut than the competition. Designed for work on moldings and edge trim, these are perhaps the most durable of all planes, with some still in use over 100 years, if cared for.

While not designed for curved surfaces, these tools are an essential companion for furniture making and similar crafts. These planes feature a fence and depth gauge, allowing them to cut grooves and rabbets. The blade is set at a 35 degree angle.

Perfect for cutting window sashes, tongue and groove floorboards, and similar tasks, this plane is very useful but not as well-known as other types. Designed specifically for cutting rabbet joints, the rabbet plane has been around for centuries. The blade protrudes the tiniest amount from sides of the tool, allowing for a more square cut with less risk of binding up.

Usually, these planes are about ten inches long and the blades are around 1-1/2 inches. This unusually-shaped plane is designed to get into corners or flatten the bottom of depressions in detail work that would otherwise require a chisel.

While still a useful tool, router planes have largely been replaced by more modern tools. Think about everything you know about hand planes. Got it? Now chuck it out the window, because the scrub plane is in a league of its own.

Originally designed for ripping work, this plane removes material quickly, allowing you to switch to your bench planes once an oversized board is trimmed down to size.

Shoulder planes closely resemble bullnose planes in design, but measure up to eight inches in length. Much like a bullnose plane, they’re great for detail work. However, the longer nose helps ensure the plane stays flat and is mainly used for cutting the shoulders of rabbets and tenon joints.

Originating in the early 1800s, shoulder planes are mainly used today in independent woodworking shops, whereas many larger shops have turned to machines for shoulder work. Smoothing planes are the final tool in the bench plane family. They measure five to ten inches long and leave the surface ready for any finishing. They can also be used for general planing purposes or leveling high spots.

Note that fans of the 4-1/2 inch variant often consider it to be a mid-range and not a smoothing plane.

Parts of a Hand Plane

Despite their deceptively simple design, hand planes are a varied lot that can be a bit more complicated the more you delve into them. There’s a reason why modern tools have failed to replace them, however, and learning more about what they are and how they work will show you why.

There are quite a few components to a hand plane, some of which are only present in larger models, but all of which serve an important function.

How a Hand Plane Works Hand planes are designed to slide across the body of a board. As the user applies pressure, the blade cuts into the wood like a chisel, forcing the shaving up through the mouth, where it’s chopped by the chip breaker to ensure the shavings aren’t big enough to clog the mouth.

The type and size of the plane determines how smooth the resulting surface will become, with the largest planes generally leaving the roughest finish.

Which Hand Planes to Buy First

Unfortunately, this is one of the more complicated questions, as the answer is largely subjective. But if you’re new to woodworking, here are 3 hand planes most often recommended.

A good bench plane, such as the super common No. 5 jack plane is great for starting off. Its blade is 2 inches wide making it compatible with almost any sharpening system. A jack plane is super versatile but mainly used for flattening boards or prepping rough stock.

Starting your hand plane collection with a good block plain is usually a no-brainer. While it’s usually the smallest and least expensive hand plan, it’s also the most versatile. This plane can be used for a variety of tasks including flush trimming dovetails, cutting end grain, cleaning up mill marks, and easing sharp edges.

While the case can also be made for a jointer plane or shoulder plane, a quality smoothing plane is a good starting plane that should get plenty of use. It’s usually going to be the final plane used on a wood surface and when used correctly, its finish often surpasses that of fine grit sandpaper.

Why Are Hand Planes So Expensive?

This is another complicated topic, and some planes are expensive just because of the brand. But more often than not, the price is based on the amount of metal used, the number of precision parts, handcrafted parts and labor, or the quality of the blade.

For example, shoulder planes are less common and have a large number of machined parts, raising the production cost. A good kanna is hand crafted to be extremely precise, resulting in higher labor costs.

Meanwhile, a Stanley bench plane may have a heftier price tag than an equivalent off-brand due to the fame or reputation of the former company over the latter.