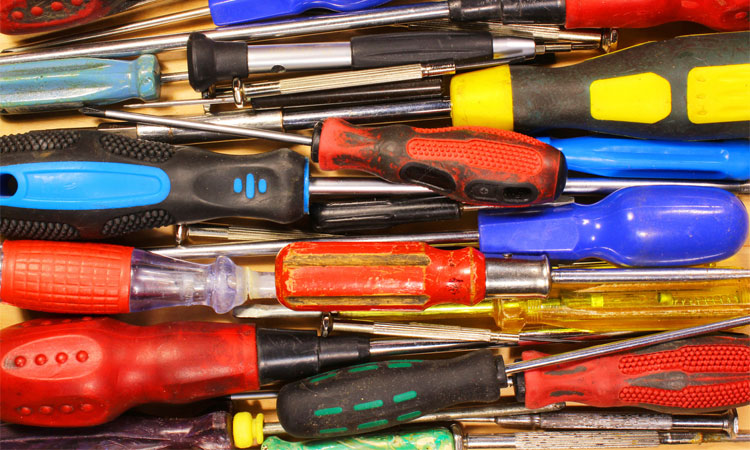 Note: This post may contain affiliate links. This means that at no cost to you, we may earn a small commission for qualifying purchases.
113 shares

Have you ever looked at a screwdriver set and thought “There are more sizes than I’ll ever need” only to read reviews and find out they’re incomplete?

Getting a set that has the sizes you need most can often be more important than buying a “full set” that lacks one or two vital sizes. But how do you know when you have all the necessary sizes?

Read on to find out more about the various screwdriver sizes available for the five most common screw head shapes.

The shank length will affect whether the screwdriver can fit into a deeper recess  (perfect for automotive work) or if it functions best where there’s very little room for your hand. Note that the length of the handle is proportionate to the length of the shank, so short-shanked drives also have short handles.

See also:  Parts of a Screwdriver

This popular cruciform drive has become a standard in many countries. Less prone to slipping than slotted screwdrivers, the design still has some issues at high torque that have since been resolved in newer cruciform designs.

As with slotted screwdrivers, Phillips drives are popular in precision work, being a staple in laptops and other electronics.

To an extent, Phillips screwdrivers may be used on any cruciform screw, although there is an increased risk of cam out and damage to the head. Part of this is the fact that a Phillips driver is sized through a number code instead of an Imperial/SAE measurement and can fit two to five sizes of head above its own.

This screw drive is often referred to as an improved version of the Phillips drive. Instead of the Phillips’ pointed tip, tapered flanks, and rounded corners, a Pozidriv has a blunt tip, parallel flanks, and an additional small rib between each slot. This allows for increased grip between the bit and fastener.

While you can fit a Phillips bit in a Pozidriv fastener, it will likely cam-out before you can fully tighten it. A Pozidriv bit will not fit inside a Phillips fastener. Pozidriv bits have a “PZ” marked on them along with five common sizes.

Hex keys are named because they have a smooth hexagonal shank and no head. More commonly referred to as Allen wrenches, these screwdrivers sometimes come in an L-shaped shank with no handle, as multiple retractable sizes with a centrah handle (ala Swiss army knives), or even with a ball-shaped tip.

Measurements for hex keys is done via AF (short for across flats). To measure an unmarked key, for example, you would measure the distance between two opposing ends. This makes it easy to determine the key needed for a specific hex screw when you’re not sure of the size.

Popular in both construction and electrical fields, the Robertson drive (commonly referred to as the square drive) is more common in Canada than the US due to licensing problems earlier in its history.

Now that the original patents and licensing restrictions have begun to expire, Robertson screws are gaining in popularity worldwide.

Much like Phillips screwdrivers, Robertson drives use a numbering system. What sets these apart, however, is that all sizes are also color-coded for easy reference.

Sometimes referred to as the star drive due to its rounded 6-point star shape, the Torx drive is designed to function at higher torques and have a longer lifespan than other popular screwdriver types.

This has made them quite popular in both electronics and automotive industries. They can also be used as an emergency substitute for hex drives, although there’s a higher risk of stripping the head.

Torx drives use a numbering system based upon the distance between two opposing points. Unlike other driver measuring systems, the same numbers on a Torx screwdriver apply to both SAE and metric scales.

You can identify the size required for a random screw by measuring the width of the slot and comparing it to a Torx sizing chart.