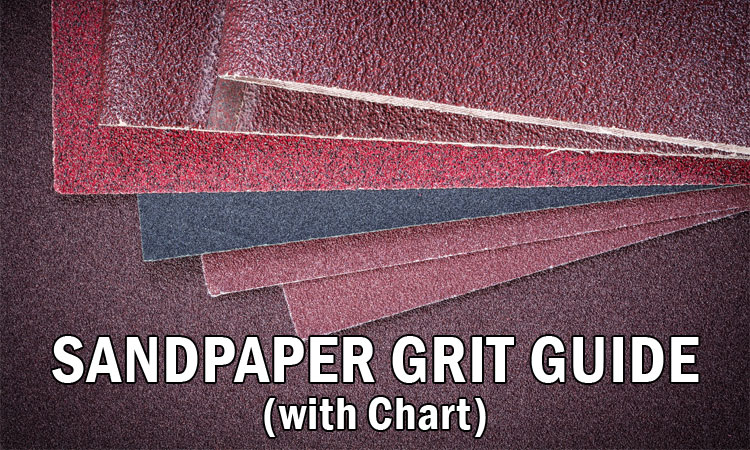 Note: This post may contain affiliate links. This means that at no cost to you, we may earn a small commission for qualifying purchases.
104 shares

There are several items that every well-stocked garage should feature in abundance. Of these items, few are as important as sandpaper.

Sandpaper, in its many varieties, carries a list of uses that is as lengthy as the day is long. From finishing elegantly crafted woodworking projects, to salvaging rusted and pitted metallic surfaces, sandpaper’s value is unparalleled.

However, in order to make the most out of sandpaper use, one must determine that which is best suited to the project at hand.

Sandpaper comes in many different types and can be used by hand, or in conjunction with various types of sanders (belt sander, random orbital sander, etc.)

To further complicate matters, sandpaper is offered in numerous grit ratings. The exact grit of sandpaper that is to be used, is dependent upon the results which one wishes to obtain. In many cases, the use of multiple grits of sandpaper is necessary when attempting to complete one specific task.

If you wish to learn more about sandpaper, and its many uses, then you’re in the right place. What follows will demystify the matter of sandpaper selection, thereby allowing you to make the most out of every moment spent in your garage or shop.

What Does the Sandpaper Grit Number Mean? Every piece of sandpaper carries a specific grit rating. This rating describes the size of abrasive materials which is affixed to the paper’s backing. As a general rule, the higher a sandpaper’s grit number, the finer its abrasive media. On the other hand, lower grit sandpaper features much larger abrasive media.

Sandpapers of a lower grit rating are better suited for removing material at a rapid rate, and quickly renewing deeply pitted surfaces. On the contrary, higher grit sandpapers are ideal when attempting to provide working surfaces with a smooth, vibrant finish that is free of unsightly swirl marks.

Sandpaper grit rating is typically denoted by one of two rating designations. These designations include those established by the Coated Abrasive Manufacturers Institute (CAMI) and the Federation of European Producers of Abrasives (FEPA).

If sandpaper grit numbers are prefixed by the letter “P”, then it is considered a FEPA designation, while straight numerical ratings are typical of the CAMI variety. No matter the rating designation, the same low (course) to high (fine) grit is standard. When using any type of sandpaper, it is important to consider the exact goal that is to be achieved. If you are intending to remove excess material from a work surface, then coarse grit sandpaper will serve as the best possible choice.

Alternatively, if you are simply attempting to finish a previously prepared surface, then the use of finer grit sandpaper will be in order.

However, there are many cases where the use of multiple grits of sandpaper is necessary. This is often the case when you wish to remove excess material, yet finish your project in a refined manner. When such a situation presents itself, a proper understanding of the grit sequence is of the utmost importance.

Grit sequence is defined as the order in which multiple grits of sandpaper are used, in relation to one another, when attempting to achieve the desired finish. By following the standard rules of grit sequence, one can obtain any finish that they desire, no matter the original texture of the material that is to be surfaced.

The most important rule of following grit sequence is to move to progressively higher grit (finer) sandpaper upon each application. Doing so removes swirl marks that are left behind when using more aggressive grit paper during the step prior.

It is vital to prevent progressing in grit too rapidly. Doing so can present less than desirable results, which can necessitate repeating prior steps of this sequence. In any event, you should only move on to higher grit sandpaper, rather than returning to coarser grits, unless major imperfections have become evident.

Any project should be finished with the highest grit sandpaper at one’s disposal, or with sandpaper of a sufficiently fine grit to obtain the exact finish that is desired.

Though one would be tempted to believe that all sandpaper is of the same general makeup, this is actually far from the truth. Sandpapers differ greatly in the types of abrasive material that they feature.

The most popular types of sandpaper abrasives include ceramic, aluminum oxide, garnet, flint, and silicon carbide. Each of these individual sandpaper types has their own specified uses, and are more adept for particular tasks.

Ceramic sandpaper is extremely durable and is typically red in color. Sandpaper of this type is used heavily in both wood and metal applications, while also being a favorite of those who utilize power equipment when sanding various surfaces.

It is worth noting that ceramic sandpaper often commands a higher price than that which features alternative forms of abrasives.

Aluminum oxide is synthetic in nature and is typically denoted by its tan or gray appearance. Sandpaper of this variety can be used in numerous applications, including sanding wood and metalwork.

This variety of sandpaper is also known to be quite resilient and is a favorite of many avid DIY specialists.

Garnet is a natural abrasive that often takes on a red or golden appearance. Sandpaper of this nature is known to be well suited to numerous small tasks, yet is not durable enough to be used in large surfacing projects.

Garnet sandpaper is often regarded as one of the best available options for meticulously finishing wood surfaces.

Much like garnet, flint is a natural abrasive that is used regularly by those finishing wooden surfaces. Sandpaper of this type most often takes on a beige appearance and is not as durable as many alternative sandpaper types.

However, flint sandpaper can typically be purchased at a rather economical price point.

Silicone carbide consists of a synthetic makeup and ranges in color, but most commonly takes on a gray or charcoal appearance.

Sandpaper of this variety is largely impervious to water, making it an excellent choice for wet sanding, though many also use silicone carbide sandpaper for dry sanding applications.

Silicone carbide sandpaper is also a favorite of those who routinely finish painted or treated surfaces. Sandpaper can be applied to a surface in many different ways. The preferred method of application depends upon multiple factors including the size of the area that is to be surfaced, the material which is being treated, and any contours which must be worked around to obtain the desired results.

The following are several of the most common tools used with sandpaper. A sanding block or sanding sponge is the go-to for those attempting to work small to moderately-sized surfaces, to a high degree of uniformity. These blocks feature both a flat and beveled side, as well as clasped end joints that secure sandpaper in place.

The flat side of a sanding sponge or block allows the sandpaper to be drawn across a surface in a concise manner, while the beveled side of a sanding block provides an ergonomic grip for its user. The slight give makes these ideal for sanding edges. A pole sander consists of a face and clamping mechanism, which is attached to a pole that provides an extended reach. Sandpaper is affixed to the clamping head of a pole sander, which holds it securely in place during the course of one’s efforts.

The length of the sander’s pole allows the unit’s user to access otherwise unreachable areas, in a timely manner. Sanders of this variety are a favorite of those in the drywall business or those who are otherwise surfacing walls of an alternative design.

See Also: How to Sand Concrete With a Pole Sander Random orbit sanders are electrically controlled devices that oscillate in a non-directional manner. Sandpaper is affixed to the head of this device, allowing its user to sand and finish surfaces in a much more timely manner, than would be the case with a traditional sanding block.

Random orbit sanders also prevent swirl marks from being etched into any surface that is being treated. Standard orbital sanders are electrically controlled devices that oscillate in a defined manner, thereby removing material from any surface that is being treated. Devices of this nature feature a rectangular head, to which a sandpaper sheet is affixed.

Orbital sanders are excellent for finishing small to moderately sized surfaces, though they are often not aggressive enough to cover large surfaces in a timely manner. Detail sanders can most easily be defined as an orbital sander, with a triangularly shaped head. Much like orbital sanders, a device of this nature is electrically controlled and oscillates in a defined manner.

However, due to a detail sander’s non-traditional head shape, work can be more easily conducted around edges and other difficult to reach areas. Benchtop sanders are electrically controlled sanding devices, of a stationary variety. These sanders are typically fixed to a workbench and can be of a sanding belt or disc-style configuration.

Benchtop table sanders are excellent for removing material in a time-efficient manner. However, they are only of use in applications where one possesses the mobility to move the project at hand about, in a relatively free manner.

But that is also one of their main benefits. You are able to use both hands to control the workpiece so it can be used for fine detail work as well as quickly remove large amounts of material. The downside is the amount of space they require.

Handheld belt sanders are a form of power tool that possesses the mobility of an orbital sander, but is capable of removing material in an aggressive manner, much like a benchtop sander.

A belt of sandpaper is affixed to this tool, where it continually rotates, removing excess material in the process. Caution should be used when operating a handheld belt sander, as overzealous use can result in surface imperfections and burn spots. Rotary sanders come in many different forms and can be powered both electrically and pneumatically. Most tools of this nature utilize a specialized bit or ending disc, to remove excess material from any surface being treated.

Rotary sanders tend to be a favorite of those who are conducting highly detailed or intricate work, as relatively small areas can be treated, while leaving the greater surface unaffected, as a whole.