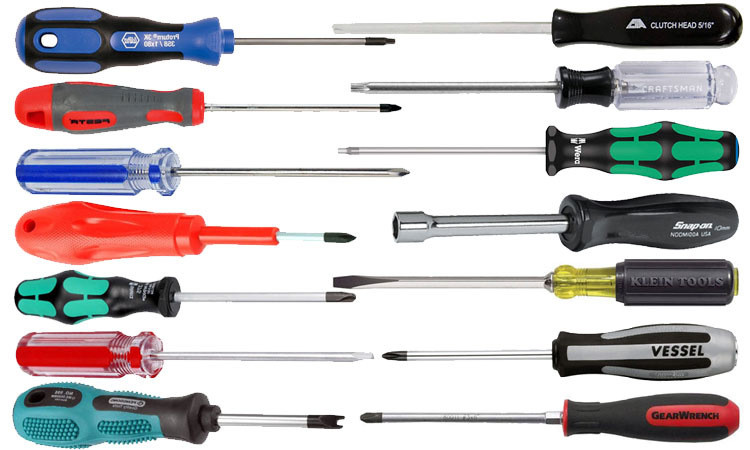 Note: This post may contain affiliate links. This means that at no cost to you, we may earn a small commission for qualifying purchases.
293 shares

Screwdrivers are one of the first tools a child is introduced to. They perform a simple function and have a very simple design. Or do they?

Most people have heard of at least two types of screwdriver, but there is actually a wide range to choose from. From the common Torx to the not-so-common tri-point, every shape has its own purpose. Let’s take a moment and explore 14 different screwdriver types and what they’re used for.

There are several types of screwdriver heads that are commonly needed for items around the house. There’s a good chance you already own some or all of these.

Once the most popular of all screwdriver types, these screwdrivers have a chisel-shaped blade which spans the width of a screw’s head. They often double as a chisel in emergencies, and can also be sometimes used on a Phillips head screw.

Known for being less likely to round a slot than Phillips screwdrivers, the tip of these is sometimes prone to slipping sideways out of a slot when a lot of pressure is applied. For this reason, they’re not as popular among professionals as they once were, but are still a staple in most fields.

Just about everything uses a Phillips head these days, from furniture to appliances. The angled tip means you can fit a screwdriver deeper into the screw head and there’s no risk of the blade sliding out sideways.

These drivers are intentionally designed to cam out (i.e. slip out of the head when a certain torque limit is exceeded), which is considered both a strength and weakness.

Torx drives were originally used for security functions, but they’ve since become popular in commercial fields. The blades of these drives resemble a rounded off star or flower and provide incredibly high torque tolerances.

Currently, Torx drives are popular in appliance manufacturing and security fields due to their efficiency and the fact that consumers have a more difficult time taking apart an appliance that has Torx screws.

Another, more unusual type of screwdriver that has become increasingly popular, the hex key most commonly lacks a handle or tip. In most cases, they resemble a small, six-sided metal shank bent into an L-shape and lacking a head. They’re often included at no cost with packaged furniture.

Allen wrenches are most commonly used in bike maintenance, but have become increasingly popular with furniture companies such as Ikea and with some appliance manufacturers. A specialized security version of the hex key is used in high-risk fields, such as prison maintenance.

Hex screwdrivers take it up a notch by having a comfortable handle and a longer shank than their allen wrench counterparts.

This is the least common of the common screwdrivers and tends to sit in the bottom of tool kits, but it’s actually popular in its native country (Canada) and has perhaps the highest torque tolerance of all drive types.

Because of its durability, square head screws are commonly found in automotive and furniture industries. They are frequently included in comprehensive screwdriver sets, and the increased popularity of international companies means that these screwdrivers will be seeing increased American usage in the years to come.

Other Types of Screwdriver

While there are plenty of variations in screw head types for just the four most common shapes (slot, cruciform, hex, and Torx), there are far more that you’ve likely never heard of.

The following are some of the many more specialized screwdriver types you may run across. You’ll notice that the parts of a screwdriver are all very similar with the tip being the main difference.

Clutch head screws have gone through a few design changes over the years. The slots resemble a bow-tie, with the older version having a circular recess in the middle. You will mostly find these screwdrivers in use throughout the automotive industry, being popular in recreational vehicles and older GM vehicles.

A clutch head screwdriver will have better torque with these heads, although they are designed to also be compatible with slotted drives.

There is also a security version that can be screwed one way with a slotted screwdriver but cannot be easily removed. These are found mostly in places where maintenance is infrequent, such as bus stations or prisons.

Also known as: Reed and Prince

This variation of cruciform is very similar to a Phillips at first glance, but has some important distinctions. The tip of a Frearson comes to a sharp point, whereas the Phillips has a rounded point.

Additionally, the angle of the tip is closer to a 45 degree angle than on a Phillips. This makes it possible to use a single Frearson screwdriver on any size Frearson screw (as well as many Phillips screws).

The unique shape of a Frearson screwdriver allows for higher torque than a Phillips, and the ability to carry just one drive makes it very popular for nautical equipment and in other areas where precision and a smaller set of tools are required.

Being one of the world leaders in technology requires uniformity and high standards. As a result, every major industrial field follows standards set my a special committee. JIS screwdrivers are a cruciform similar to Phillips but are designed to resist camming out.

You will find JIS screws in most quality products coming from Japan. It’s possible to use a Phillips or Frearson drive on these screws, but with an increased risk of damaging the head. JIS screws often have a small mark or dot near the slot to help identify them.

Nut drivers are something a lot of DIYers never see, but they can be very useful in mechanical industries. These drives are designed with a socket instead of a blade and tip, thus acting in a similar fashion to a socket wrench.

The advantage of using a nut driver is apparent the moment you try reaching a recessed bolt. Socket wrenches have a handle which runs parallel to the surface in which the bolt is embedded, requiring additional space to turn.

The straight shank and handle of a hex socket means that you can turn such bolts with very little clearance. Great for low torque applications but stick with the normal ratchet plus socket combo for everything else.

Designed as an update of the Phillips design, Pozidriv screws can be identified by the four additional lines radiating from the center. These screwdrivers have a blunt tip and small ribs among the blade between the main edges. These improve torque and reduce the risk of cam out.

While Pozidriv and Phillips are very similar, the designs are different enough that their cross compatibility comes with an increased risk of damaging the screw head. Pozidriv screwdrivers have less chance of camming out, but the process for manufacturing screws requires twice as many steps, preventing them from replacing Phillips as an industry standard.

Not to be confused with the British term, these unusual drivers are designed for tamper-proof functions. The flat-headed screws have two rounded holes on opposing ends of the head, making it nearly impossible to remove without a proper tool.

Due to their highly secure nature, you will most likely see maintenance workers using these screwdrivers in subways, bus terminals, elevators, or public restrooms. Spanner screwdrivers have a unique flat blade with two prong tips protruding from the end.

Named after its triangular shape, the TA drive is frequently used in electronics, toys, and appliances. Its design makes it difficult for people to tamper with safety covers, adding a degree of security. However, a hex drive can grip TA screws, which is why these drivers aren’t as common in screwdriver sets.

A variation of the TA is the tri-point-3, which has rounded edges to overcome the TA’s less- secure compatibility with hex drives. Measurements for the tri-angle drive are in sizes preceded by a TA prefix.

The tri-point has a three-edged blade that resembles a Y set at equal 120-degree angles. The screws are extremely popular in handheld electronics and are difficult to manipulate without the correct driver.

You can find these screws in Apple products, Nintendo handheld gaming systems, and similar devices, but will rarely encounter Y-type screws in larger electronics or non-electronic fields.

Vaguely resembling a pinwheel, the screw heads have a triangular socket with three straight “wing” extensions following each edge in a clockwise direction. They were originally developed for aerospace engineering but are now most commonly found in home electronics.

A variation of the screw uses left-handed threads, although the same driver may be used for either thread direction.

Up until now, we’ve discussed screwdrivers based upon the types of screw or bolt they work with, but did you know there are also variations in shank or handle design? These variations allow for a much wider range of motion and better clearance in certain circumstances.

You may or may not need some of  these, depending upon your profession or hobby, but it’s always good to know they’re available when needed.

There are many types of electric screwdriver. Each has its own advantages, but the one thing they all have in common is that they apply torque without the need for manual strength. Sometimes referred to as a screw gun, power screwdriver, or automatic screwdriver, these tools can make tough jobs a snap, especially when working on damaged heads.

Many electric drives use battery power, allowing them to be extremely compact. These don’t have the same degree of power as other types, but they take up far less space in your tool belt.

These aren’t very popular simply because they require tethering, but the amount of power they put out is constant. This makes them extremely useful at a busy workstation.

Cordless screwdriver models use a rechargeable battery pack, allowing them to take away perks from both corded and battery-powered drives. Unfortunately, they also have some of the disadvantages of both, being bulkier than battery-operated and slowly losing torque as the battery pack runs out of power.

A Note on Using Power Drills: While not as efficient as an electric screwdriver, electric driver bits can be used in a cordless drill, making this a popular alternative.

The downside is that most power drills are unable to react to changes in resistance with the same efficiency, making it easier to accidentally damage a screw head or the material you’re driving the screw into.

Magnetic screwdrivers are an increasingly popular alternative to the common driver. These drives feature a magnetic tip which holds the screw, allowing you to place or extract a screw with only one hand. Due to the higher efficiency, more and more manual screwdrivers are being sold as magnetic by default.

Some screwdrivers have a ratchet function. This allows the driver to turn screws in one direction only. The direction (clockwise or counter-clockwise) may be set depending upon the job. Being able to ratchet can shorten work times by preventing the screw from being turned the wrong way when adjusting the driver.

As the name implies, many screwdrivers are designed to be turned at right angles. This allows you to work with screws in locations where there isn’t enough room to fit a straight handle, making them extremely useful in the automotive industry and similar fields.

A class of precision screwdrivers, these are drives designed to work with tiny screws, such as those you find in eyeglasses or pocket watches. In most cases, jeweler’s sets are a combination of slotted and Phillips sizes.

One of the biggest problems with tools is the difficulty of finding ones which are compatible with left-handed individuals. Thankfully, the screwdriver is one of a select few of tools which function in either hand with equal precision. So go out and buy that set you had your eyes on with confidence!

18 thoughts on “14 Different Types of Screwdrivers and Their Uses”