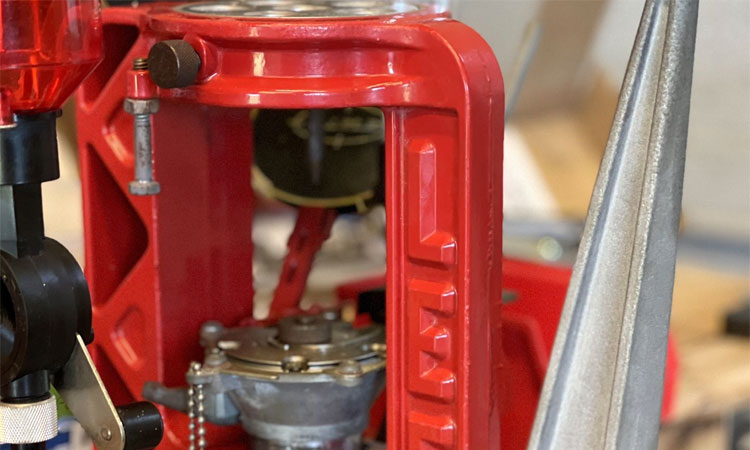 Note: This post may contain affiliate links. This means that at no cost to you, we may earn a small commission for qualifying purchases.
3 shares

Whether you hunt for sport or food, having a good reloading press in your workshop allows you to reload cartridges and shotgun shells for less cost than it takes to purchase new cartridges.

Hand loading can result not only in less cost over time, but can also increase accuracy or improve the quality of the ammunition to meet specific preferences.

Reloading equipment, including a dedicated reloading bench or stand, is an investment that pays off over time by allowing you to reuse the expensive brass shells left behind by spent cartridges. 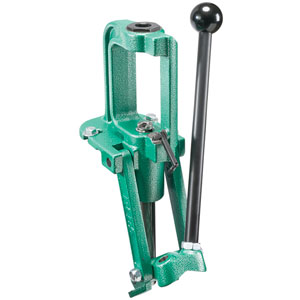 Made in the USA, RCBS has chosen to go for power over weight concerns with their Rock Chucker press. This sturdy metal press has a solid steel handle with ball grip and four inches of load-bearing surface to support the one-inch diameter ram.

Not only is this arguably the best single stage reloading press, it has the ability to be upgraded to a progressive loader using a piggyback, and is designed to handle all of your bullet swaging, case forming, and reloading needs. 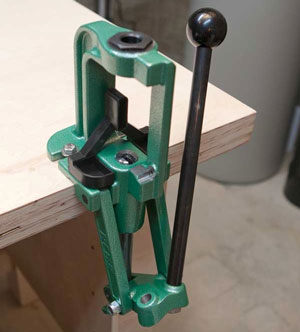 Those who have used the Rock Chucker Supreme note that it’s very easy to use and has excellent leverage. Being much heavier than many similar presses, users have been able to load cartridges using far more force than other presses can handle.

In the rare event there is a problem with the press, owners have noted that the RCBS customer support is outstanding and usually rectifies problems quickly.

There have been a few complaints about the primer catcher on this press. Consumers have noted that primers often miss the catcher completely, and getting it to work properly can be difficult. A few have also noted that the catcher can break when it’s being removed. 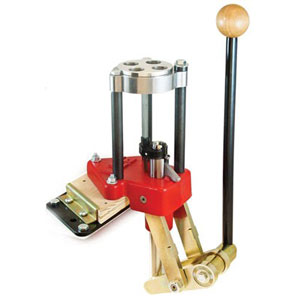 Lee is another well-known American brand that has a solid reputation when it comes to reloading presses, and their Classic turret press is no exception.

The ram features a long stroke capable of loading rifle cases longer than three inches by using an automatic index. It is supported by a cast iron frame with more than 12 square inches of area.

This press has gained a diverse following, with some users reloading pistol caliber cartridges and others preferring shotgun shells. They generally agree that the auto-indexing feature is slower than many other progressive reloaders, but is still faster than a single stage press. 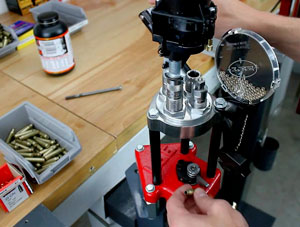 This makes it a good mid-range tool. More importantly, long-time owners report a high level of consistency to the reloaded cartridges.

Consumers have not found many problems with the Classic Turret. In a few cases, not all of the parts were present after shipping, requiring the customers to order the missing parts separately.

There have also been a small number of reports claiming that parts have broken during use, although it has not been confirmed if these are isolated incidents or the result of a bad batch. 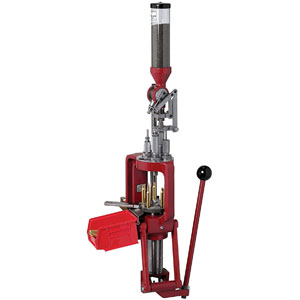 Capable of reloading up to 500 rounds per hour, the Lock-N-Load is a professional grade, five station progressive press with auto indexing.

The patented Lock-N-Load bushing system allows you to switch out dies for another caliber in a matter of seconds and from 223 to 45 in mete minutes. You can also change powders with the push of a button and the EZ-JECT system provides reliable cartridge ejection every time.

The feedback on this reloading press is almost universal. Fast, efficient, and easy to both assemble and use are just a few of the qualities attributed to the Lock-N-Load. The included assembly instructions are clear and easy to follow, plus there are plenty of additional guides online.

Proper assembly is a must for this product and most complaints are due to poor assembly. However, there are also several complaints that suggest a few owners received refurbished products. Some were badly damaged in pristine boxes while others had clear signs of wear. Make sure to order from a reputable online retailer to avoid this issue. 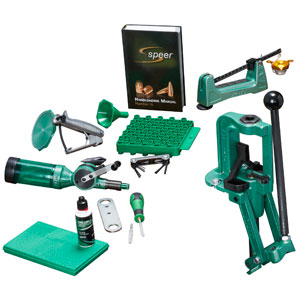 Sometimes you just need to refill a few cartridges, and sometimes you want to go all out.

While not all-inclusive, RCBS’s starter set is a great value with all of the tools included and offers a significant savings over purchasing separately. The set is good for beginners and adequate for more advanced users who may need to purchase additional dies and components.

While specific dies and cartridge holders must be purchased separately to fit the calibers you work with, it doesn’t feel like a significant omission due the the wide variety of calibers that exist.

The Master Reloading Kit contains just about everything a gun enthusiast could ask for in a reloader. Starting with the aforementioned Rock Chucker Supreme, this kit throws in several more tools:

There aren’t many complaints about this kit, although a few omissions have bothered some users. The funnel is designed for larger calibers and is less consistent when used on small caliber cartridges.

The included manual is also not the most comprehensive on the market, which might create problems for some just starting out. A few users have also noted that the scale is not as accurate as it could be. 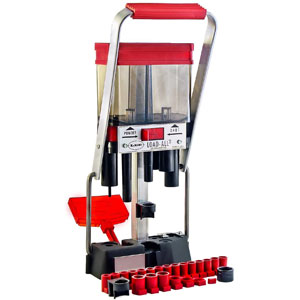 A product named after its manufacturer needs to be worthy of carrying that honor, and this tool has proven itself. Designed for 12 gauge with 24 shot and powder bushings, it has everything you’ll need to load 2-3/4 and 3-inch shells.

This reloader is capable of factory-quality shells if you properly line up the casings (one user claims the secret to perfect crimping is to crimp three times, rotating the shell 1/3 each time). Overall, it’s easy to use and most complaints abput quality are solved with practice or a different bushing size.

Crimping on this press can take some time to master and it can get a little finicky with new shells. While great for casual use, it might prove a little too slow for people who use their gun constantly. 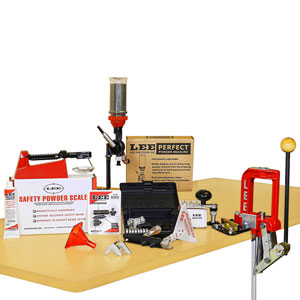 One of the best things about this kit is that it’s perfect for beginners and has most of the equipment you’ll need to get going right away.

It’s incredibly precise, allowing even amateurs to produce high-quality rounds. Best of all, there are a wide array of video guides available online so you’ll never be stumped.

The complaints revolving around this product all revolve around third party sellers. Products often arrive with missing or substituted parts, and some sellers have been known to charge up to twice the price of the official website.

When purchasing online, be sure the seller has a good reputation and, when possible, only buy from official outlets. 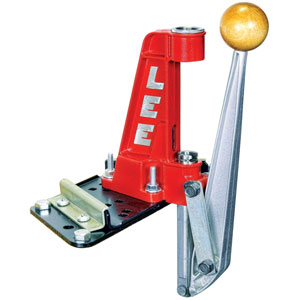 This precision press is a great addition to your work station, especially when used in tandem with other presses. It’s compatible with standard universal press shell holders as well as 7/8 x 14 thread dies. Whether you use it for decapping, sizing, or seating, it’s a great tool. Be warned, however, that it doesn’t use bushings.

When used as intended, this is a top-notch tool. While it’s possible to reload with it, this is not an intended function (hence the incompatibility with bushings), and the majority of negative reviews you’ll find are people trying to use it as their primary reloading press.

Instead it acts as an excellent companion press for repetitive tasks such as decapping, bullet seating, crimping, swaging, and base bulge removal. Because of its simple design, cleaning and oiling is a breeze.

This press isn’t for everybody and tends to work best for lighter use. The primers have a habit of missing the collector, so you may need to rig something to catch them with. As already noted, this tool is designed for use as a companion tool, so it’s not built to take as much abuse as other Lee Precision tools.

Single-Stage vs. Turret vs. Progressive (What’s the Difference?)

A single-stage press is the easiest to learn the reloading process with, requires fewer adjustments than a turret or progressive press and is the least expensive of the three.

The single-stage press also has the slowest production rate of the three, but is the ideal press for reloading smaller amounts of ammunition.

A good single-stage press will last a for many years and will always be useful, even if you decide to upgrade to a turret or progressive press later on.

Turret presses are designed for reloading larger batches of ammo than a single stage, being able to reload up to 200 rounds per hour, but are less expensive than a progressive press. More than one die can be mounted on a turret press at a time.

Turrets also have the ability to move the cartridge from one station to the next for each reloading operation. Most turret presses have powder-measuring attachments that help speed up production time.

Progressive presses generally cost the most money and are designed for reloading large amounts of cartridges, up to 500 rounds of ammo per hour. The typical progressive presses has four to five separate die stations to hold dies for multiple calibers and powder measures.

This type of press will require you to spend additional time setting it up, extra time making adjustments when switching calibers and more maintenance to keep it operating efficiently.

Where Should I Mount My Reloading Press? 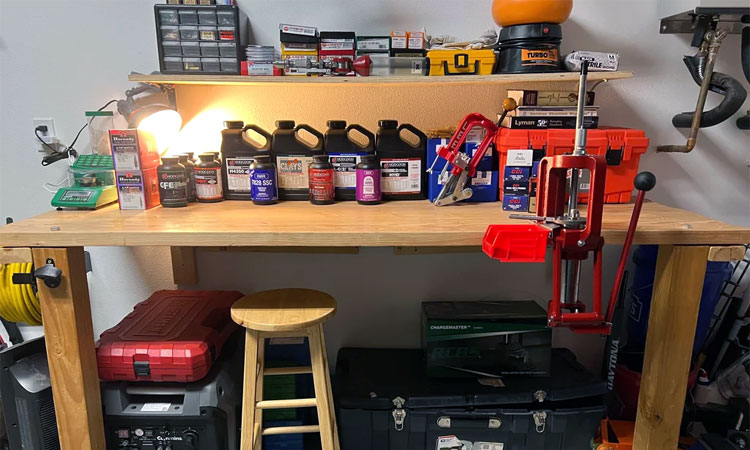 A good dedicated reloading bench or stand is a must if you’re serious about reloading. You should select a spot on the bench where it will be convenient for you to both reach the handle and observe the action of the press.

If you’re right-handed, you’ll most likely want to mount the press on the right side of the bench, but this is a matter of personal preference.

You will typically need a minimum of 8-10 inches of space on both sides as well as behind the press to allow enough room for keeping your cases and components handy. Once mounted, work the handle through its full range of motion to be sure the press operates smoothly.