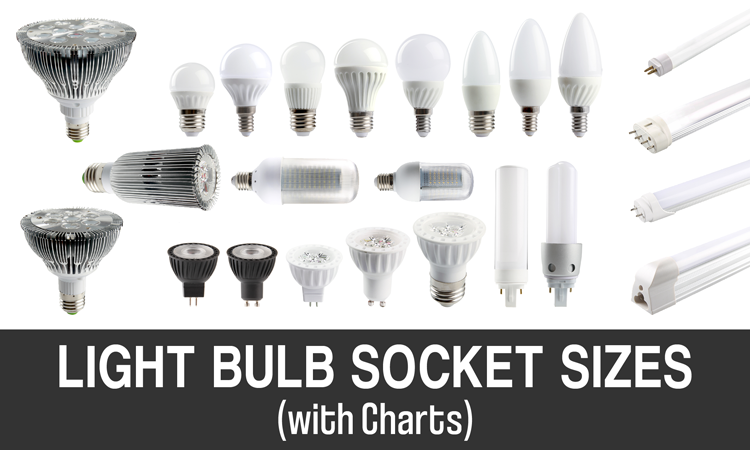 Note: This post may contain affiliate links. This means that at no cost to you, we may earn a small commission for qualifying purchases.
434 shares

Have you ever had a light burn out and found you didn’t know what kind of bulb it took? Or perhaps you were digging through a drawer and found a bulb and weren’t sure what it went to. Fear not, because pairing bulbs and bases isn’t as complicated as it first seems.

Bulbs tend to be classified by three things: size, shape, and base type. As a result, the names of bulbs follow a simple pattern of type-size, with the base size usually being measured in millimeters (imperial measurements may appear on packaging in the US, but won’t necessarily be reflected in the bulb’s name.

Note: We’re using the term “bulb” very loosely here, as many light fittings no longer have a bulb shape.

We won’t be getting too far into bub shapes here, as you can get different bulb shapes for the same socket. You’ll run across designations such as A-19 (a standard light bulb) or G-16.

In this case, the designation goes by shape-size, with the number being a multiple of a base measurement (for example, 1/8″). Thus, a G-16 bulb may have an E-12 base, meaning it’s globe-shaped but requires an E-12 base (socket). You may also have an A shaped bulb with an E-12 base.

As you can see, knowing the bulb shape/size isn’t necessary for pairing a bulb and its socket. The exception is when the bulb needs to fit into a confined space, such as in your kitchen range hood or overhead garage lighting. But that can often be guessed by noting the size and shape of the space. Perhaps we’ll cover the topic in more depth another day.

When you think of a light bulb, you’re probably thinking of an Edison (screw-base) bulb. These come in a range of sizes, but three in particular are commonly used in the us: the E12 “candelabra”, E26 “medium”, and E39 “mogul”.

While most screw bulbs have a single contact, a few have a double contact. These may be identified with a “d” at the end of the name (such as E26d)

Traditionally used for LED and fluorescent lights such as warehouses, garage ceilings, or low basement ceilings, bi-pin (AKA two-pin) sockets have come to prominence due to Californian legislation requiring all new construction to use GU24 sockets.

All bi-pin sockets are designated with a G, hailing back to when the bulbs were made using glass.

Bi-Pin sockets are a little more complicated, as types require two different measurements: the distance between the center of both pins, and the diameter of the pin. The number after the G indicates how many millimeters long the pins are.

Note that the pin length (G#) and pin spacing are often, but not always, identical. Bases with a GY designation are about half a millimeter longer than their G counterpart. For the most part, G and GY bulbs are fully interchangeable despite this difference.

GU sockets include clip grooves and are designed for a rounded bulb bottom, while GZ fit squared bottoms.GU bulbs will generally fit into the equivalent GZ base, but not vice versa. GX sockets and bulbs are identical to GU, except the GX bulb lacks any grooves.

Some sockets offer a twist-lock feature. For these, the pins of the accompanying bulb include a wider tip that locks it in place when the bulb’s twisted.

Bayonets come in three flavors, all relying on a twist-lock design. Most bayonet bulbs have a pin on either side of the base which locks it into the socket when twisted.

On some bases, the pins are slightly offset to ensure the bulb only fits one way into the socket. On others, the base has three pins to deter theft.

Bayonets are designated by BA, the diameter of the base, and may include a suffix of “s” for single contact or “d” for double contact. A “-3” at the end indicates three prongs. The BA may be followed by an additional letter designating pin position, such as: