Skip to content
Note: This post may contain affiliate links. This means that at no cost to you, we may earn a small commission for qualifying purchases.
1shares

A heat gun is a versatile yet inexpensive tool that’s able to fill a number of roles, from stripping paint and thawing frozen pipes to shrink tubing and shrink wrap. Even though most models look similar, the best heat gun stands apart because it brings more to the table than the competition.

Keep in mind that any hot air gun is dangerous during (and after) use, and must be handled carefully until the nozzle has cooled to avoid accidental burns, fires, or unwanted melting. They may look like hairdryers but run much hotter. 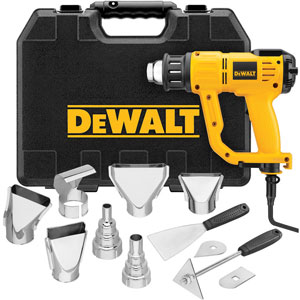 When you need something more precise than a typical heat gun or you plan on doing larger projects, this Dewalt model is hard to beat. One of its best features is the LCD display that allows you to set the temp in 50-degree increments (from 150 to 1,100 degrees Fahrenheit).

When you find that a specific temperature works best for a certain job, dial it up and you’re ready to go.

It heats up quicker than others and maintains the set temperature pretty well. With 12 accessories (and a heavy duty case to hold everything), you’ll make shorter work of bigger jobs than a normal heat gun. The D26960K maxes out at 1550 watts and its 2-speed fan pushes out up to 18 CFM. 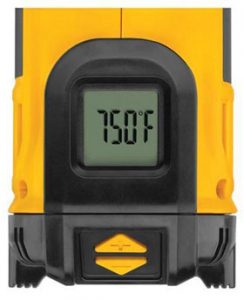 The DeWalt works great from paint stripping to hours of shrink wrap or shrink tubes. The retractable legs at the base do a good job of tip prevention when not in use. While you might never need all the included accessories, they’re nice to have on hand.

Like most Dewalt tools, features are well thought out and the lightweight (2.3 lbs) gun is comfortable to use over long stretches.

Obviously, it’s more spendy as far as heat guns are concerned so it’s not for everyone. And while the LCD readout is super useful, we wish it had a backlight to use in low light conditions. 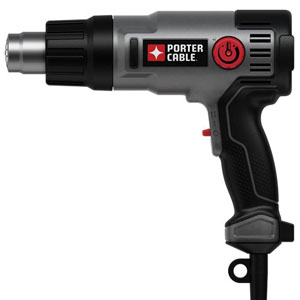 There are a few things that make the Porter-Cable one of the most popular heat guns for DIYers and hobbyists. This powerful 1500 watt hot air gun offers as much concentrated heat as any of its competitors without costing a fortune.

It has separate controls for the fan speed and heat setting, where other models in this price range might only one control. Being able to set for a higher fan speed while using cooler temperatures means this tool can be used for a wider variety of applications.

The integrated stand makes it possible to use the heat gun while working with your materials, and the cord includes a built-in ring clip for easy peg storage when the task is done.

The biggest drawback is that this is the tool only, and does not include any accessories to simplify an assortment of applications. On the other hand, the hot air nozzle is similar to other brands so finding the right accessories will not limit you to a single brand name.

All in all, you can’t go wrong with Porter-Cable tools and the PC1500HG is debatably one of the best heat guns for the money. 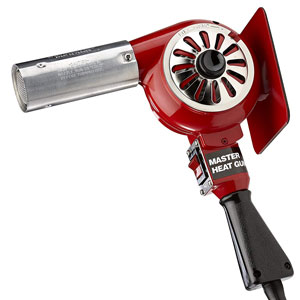 This commercial grade heat gun is made in the USA which is a rarity with this type of product. It’s available in different temp ranges with the most popular configuration being the 500 to 750 degree F model. There are even 220v versions of the gun available for those who need it.

The 1,680 watt Master Appliance gun heats up quick and the adjustable air intake is nice to have. When you’re done using it, tip it back on its large rubber-backed base and set it to “COLD” mode to quickly cool it down.

For those that use heat guns on a regular basis, you’ll appreciate that the heating elements and motor brushes are replaceable. Most other heat guns use non-replaceable parts and with heating elements usually being the first thing to burn out, you have no other option than to replace the entire unit. That’s not the case with this one.

On its high setting, the HG Series pushes out 23 CFM of airflow making it one on the highest in its class. Its highest temperatur setting may not get into 4 digits like others, but most tasks don’t require those types of temps.

Probably the biggest negative would have to be the weight. At just under 4 pounds, it’s no lightweight as far as heat guns are concerned but that also tells you something about build quality. 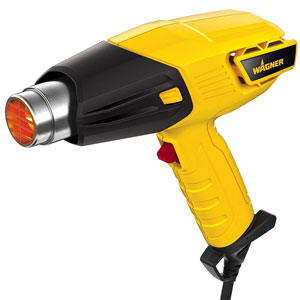 The Furno 300 is updated replacement of one of the best selling heat guns of all time, the Wagner Spraytech 0503008. At only 1200 watts but with all the power of a larger model, the Wagner is a good heat gun for small tasks, hobbies and crafts.

The Furno features 750 degree and 1,100 degree heat settings, and a two speed fan speed that is tied into the respective heat modes. Weighing under 2 pounds, it’s one of the lightest models out there and super comfortable to use.

This is not a kit, so it doesn’t include any accessories or attachments, but the nozzle design will allow you to use them from a variety of manufacturers.

In its price range, it does not have the power of the Porter Cable or the versatility of the Black+Decker, but this model still deserves a place on this page as a good safe and cheap heat gun.

The on/off switch isn’t our favorite and it’s worth noting that a few owners reported the gun stopped working after only a couple uses. While rare, the chance of a low cost gun failing is much higher than something like a DeWalt. 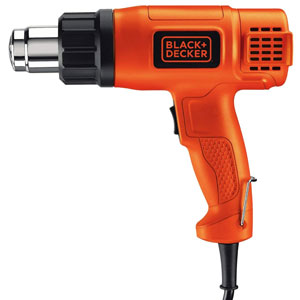 The HG1300 is an excellent heat gun for small jobs such as heat tubing and shrink wrapping. It has slightly less wattage than the Porter-Cable above, and a single control switch to easily choose between the low (750 Degrees) and high (1000 Degrees) settings.

Fan speed is fixed, which limits the applications available, but this tool does come with a few accessories to get you started on a variety of projects.

The Black+Decker features a built-in stand that supports the gun during cool down, but does not include an easy way to store or transport it. 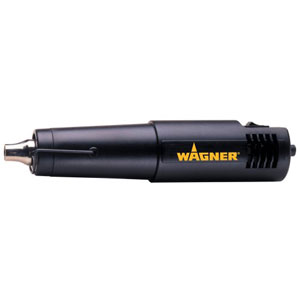 When you need a heat gun for more delicate projects such as heat embossing, plastic figurines, or working on RC cars, the HT400 is incredibly handy.

The pencil-like design means you can focus the heat on a specific area without damaging surrounding areas. The Wagner operates at 650 degrees Fahrenheit only and pushes air out at about 4.7 CFM.

It’s a favorite of crafters and hobbyists and even comes in handy away from home such as when you need to melt the ends of paracord.

While it takes a bit longer to heat up than full size models and there’s no temperature or fan adjustment, most users don’t mind that and find a good amount of uses for these mini heat gun. 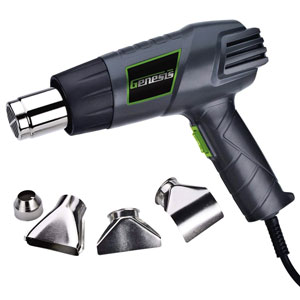 As one of the best values on our list, Genesis offers an inexpensive heat gun kit that’s popular with DIYers. This 1,500 watt heat gun has low and high settings at 572 and 1,000 degrees respectively. The 2-speed fan coincides with the heat setting and is not individually adjustable.

Included with this lightweight hot air gun are two deflector nozzles, one reflector nozzle, and one air reduction nozzle. The tool (not counting power cord) weighs only about 1.5 pounds so it’s easy to handle but doesn’t feel very well made.

When not in use, simply lean it on its back where it balances with the handle.

While it’s nice that the Genesis includes 4 accessories, it would have been even nicer for it included a case to store everything in.

Many users reported seeing a bit of smoke coming from the gun during its first time being used but it’s nothing to be alarmed at. This is likely just dust burning off and it only happens once.

Heat the old wallpaper to soften the adhesive behind it to allow you to easily scrape it off.

While you can also use a hair dryer, a heat gun is much quicker. Used in retail, making gift baskets, storing items together, and other uses.

An alternate to stripping paint via chemicals or solvents. It’s often faster and more environmentally friendly.

Use shrink tubing whenever you connect wires together for a more secure and super clean look. Common in car stereo installs or other electronics.

Those with older homes have probably faced this problem in the dead of winter. Use a heat gun to SLOWLY thaw the problem area and return water flow. While mainly used for indoor piping, it’s possible to thaw underground pipes after some excavation.

Joining plastics is often tricky when using various glues. With a process similar to stick welding, you can join two plastic pieces together using your heat gun.

Best for smaller areas, using a heat gun on the lowest setting is an easy way to dry newly applied paint when you’re short for time. Much more effective than watching paint dry.

A heat gun is great for removing old stickers from furniture or cars. Also works great for stubborn price tag stickers that sometimes seem impossible to remove using other means. Need to remove Gorilla Glue from metal? A heat gun will make your life easier.

Whether you’re prepping wood to paint, need kindling, or whatever other reason, use a heat gun to quickly suck the moisture out of wood.

Very useful in electronics repair such as when removing repairing damage to a circuit board or de-solder wires in a circuit.

Need a really big tarp? Super large tarps are often hard to find and very expensive. You can instead join together multiple smaller tarps to create whatever size tarp you need.

A favorite of all the crafty people. Use together with rubber stamping, embossing powder, and special ink to create beautiful embossed designs.

A great, inexpensive way to get introduced to roasting your own coffee without having to buy expensive roasting equipment.

Plumbers have been using heat guns for years to quickly bend PVC to whatever custom angle they need without the use of elbow joints or adhesives.

Usually best left to the pros, a heat gun, window film, and a smoothing tool is all that’s needed to tint windows. Easier said than done correctly. When it comes time to remove window tint, a heat gun can save a lot of time.

For very specific types of dents, heating followed by quickly cooling the surface often works to pop out the dent without further expense.

You can often easily remove creases and pressure marks with heat. Repairing a tear is also possible following a certain process.

While slow, it’s possible to sear meat using a heat gun, often with similar looking results as when using a cast iron pan.

Sometimes you just need to have your s’mores fix but the weather outside isn’t cooperating.