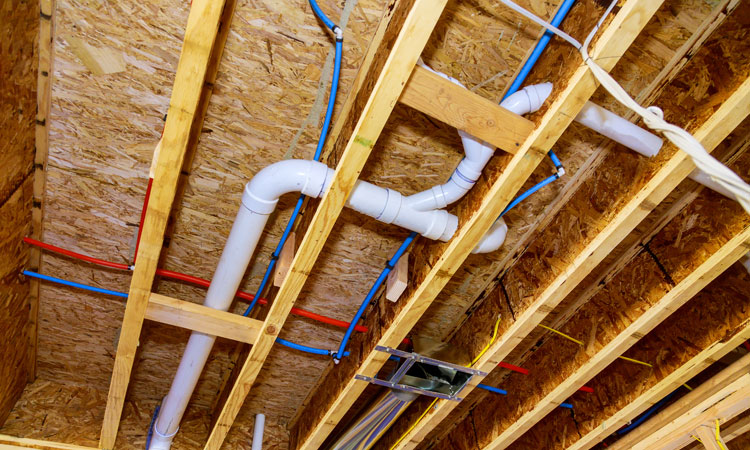 Note: This post may contain affiliate links. This means that at no cost to you, we may earn a small commission for qualifying purchases.
114 shares

PVC is such a useful material that you don’t even have to be blue for the mere mention of it to be music to your ears. From furniture to DIY projects and even structural support, the sheer number of uses have made PVC the third most used plastic in the world.

Of course, PVC does have its limits as well as advantages, and one of the places this becomes most apparent is in the world of plumbing. Thankfully, two relatives of PVC have also come to the forefront to address some of their forebear’s limitations.

Let’s take a good look at the differences between PVC, CPVC, and PEX, as well as where to use them. PVC stands for polyvinyl chloride, and is a durable plastic which has no odor and doesn’t corrode like metal. It’s the most popular material in plumbing due to its easy handling and ability to repair small sections without replacing the entire length.

PVC and its relatives are usually color-coded to make them easier to identify, with PVC usually being white in color.

Where is PVC Used?

PVC pipe comes in several sizes and may be cut using a saw or PVC pipe cutter. The material is able to safely ferry a wide range of chemicals, but has a lower temperature tolerance, so it’s used mainly for sewage and cold water in homes.

Is PVC Safe for Drinking Water?

There has been some concern over the amount of chlorine present in PVC, which is made of as much as 57 percent of this harmful chemical. However, the health risks only extend to PVC that ends up in landfills or is burned, which releases chlorine gas.

In the home, PVC pipes won’t further contaminate tap water and actually pollutes the water less than traditional metal pipes, which will erode directly into the passing water.

Additionally, there is no evidence that PVC poses a significant vapor risk, making it safer for your home’s air quality than shower curtains or most furniture currently on the market.

You’ve probably used or seen PVC-U without knowing what it was. The “U’ stands for “unplasticized”, meaning there are no plasticizers added to the formula during production.

They’re durable enough to be used in underground piping for up to 100 years and completely recyclable, leaving no environmental waste.

PVC-O is a modified form of PVC-U. During production, the molecular structure is rearranged to form layers.

This gives PVC-O a higher durability than regular PVC-U, being more resistant to corrosion or water quality degradation while also having a better balance between flexibility, stiffness, and strength.

This form of PVC is most commonly used for pressurized pipes, as well as commercial irrigation and municipal sewer mains. For an idea of how rearranging molecules improves performance, consider the higher durability of cryogenically-treated metals.

Another version of PVC-U that has had additional processing, PVC-Hi has a much higher resistance to external impact, with Hi meaning (Hi)gh Impact. It’s created using a blend, mixture, and/or copolymer that uses PVC as the base.

This allows it to handle dangerous gases up to a maximum operating pressure of 1 bar, i.e. 100 kPa.

PVC-Hi is strictly regulated by its own definition in international standard ISO6993-1 and is used primarily in industrial applications.

Are PVC Glue and PVC Cement the Same? The term “glue” is often applied to any form of adhesive which forms a long-term bond. In the PVC world, it’s sometimes used to refer to PVC solvent cement.

This cement is used for slip ends, i.e. smooth-ended pipes which slot into each other or connectors with a simple push.

You should always use a colored primer on the joints first, as this not only strips the coating and makes the adhesive stick better, but because some codes require the use of a colored primer to provide proof that primer was used.

The solvent is then applied, causing the two pieces of PVC to chemically bond together, in much the same way a bottle of plastic cement melts model parts.

How is Joint Compound or Thread Tape Different From PVC Cement?

When working with threaded ends, you will want to avoid PVC cement, as these joints are designed to be removable. Instead, one of two other adhesives, thread tape and joint compound, are applied.

These two alternatives can also be used on a wide range of materials, such as PEX or metal piping.

Thread tape is usually made of Teflon (PTFE). This tape is simply wrapped around the male threads, allowing the joint to be assembled with a much tighter fit. It’s the more commonly used adhesive of the two for DIY projects due to the quick, clean application.

Meanwhile, joint compound is a stronger alternative, but also messier and more difficult to apply. The compound must cover the threaded area completely to avoid any leaks. Unlike cement, this compound creates a waterproof seal that won’t prevent you from later unscrewing the two pipes. CPVC is a tougher version of regular PVC, usually colored gray or off-white. The acronym stands for Chlorinated Polyvinyl Chloride and, as the name suggests, it has more chlorine in it than its sibling (approximately 63 to 69 percent chlorine with a maximum potential percentage of 74).

Where is CPVC Used?

CPVC is able to handle higher temperatures than regular PVC and is used in commercial settings as well as hot water applications. Its availability in CTS (Copper Tubing Sizes) scales also allows it to replace copper pipes in residential and commercial settings.

Can PVC and CPVC Be Glued Together?

Despite being closely related, PVC and CPVC are chemically different and require their own solvents for bonding.

In theory, you can connect threaded lines together, but the difference in tolerances and com-position would put the combined line at risk of compromise. Any attempts to use a solvent cement will result in an unstable bond.

You should never combine the two materials when working on a single system (i.e. it’s okay to build a home water system with CPVC for the hot water lines and PVC for cold water and sewage, since the two don’t connect, but you can’t build a cold water line using both PVC and CPVC). PEX is a cousin of PVC, but has a very different composition. The acronym actually stands for cross-linked polyethylene and was invented in 1968. However, ongoing issues with the fittings prevented it from becoming popular until the 2000s.

PEX is usually color-coded blue or red, and is a highly flexible material that can be bent as needed, springing back to its original shape when released. In addition to the various colors, PEX is sometimes referred to as XPE or XLPE, which may cause some confusion.

Where is PEX Used?

Due to its versatility and flexibility, PEX is often used in place of PVC and CPVC.

Comparing PEX-A, B, and C

Created using different methods, the three types of PEX are generally similar, but come with their own advantages and disadvantages.

Also referred to as AluPEX, this is a sandwiched pipe consisting of two layers of PEX with a thin layer of aluminum in between.

The aluminum not only allows the PEX to hold its shape when bent, but it also creates a barrier to prevent oxygen from seeping through and oxidizing any metal components.

PEX-AL-PEX is capable of a higher operating pressure and temperature than regular PEX.

PEX pipes are quite safe, having no known impact on health or the environment after numerous studies. It’s approved for use throughout the United States and Canada.

As with all PVC-related products, the stability of the system is reduced if more than one material is used in a single system. That said, it’s safe enough to link CPVC or copper piping with PEX, as long as you restrict the system to the tolerances of the weaker material.

Why is PEX Banned in California?

Chances are, when you try to ask this of any product, nine out of ten answers will be “Because California”. However, the proper answer when it comes to PEX is: “It’s not”.

After a long battle throughout the early 2000s when it was originally banned over various concerns, California initially authorized PEX for limited case-by-case use in 2007, revising the wording of this act in 2010. PEX was approved for general use by the state on August 1, 2009.

The reason for its initial ban and later restrictions were two-fold.

First, a number of lawsuits had arisen due to failures in PEX systems, which were eventually traced to the brass fittings.

The fittings used yellow brass, which contains 30 percent zinc. When exposed to hard water, the fittings would suffer a chemical reaction known as dezincification, which resulted in leaks or blockages.

The solution was to instead use red brass, which only contains 5 to 10 percent zinc. This is now a stiff requirement in California and appears to have eliminated the risk of PEX system failures.

The second reason is more typical of California. Several groups became concerned that PEX might contaminate the water supply.

Their claim was that chemicals such as methyl tertiary butyl ether and tertiary butyl alcohol could either seep through the pipe or from it. The debate lasted for years before all groups were satisfied.

The claims were debunked in an environmental impact report and several studies which proved there were no health concerns linked to the use of PEX.