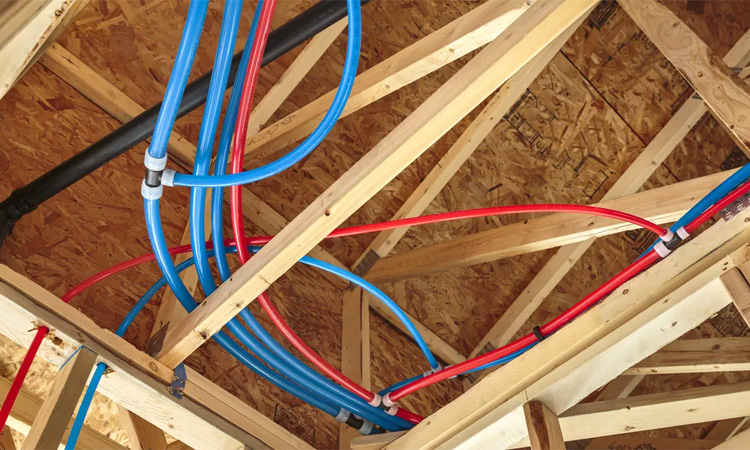 Note: This post may contain affiliate links. This means that at no cost to you, we may earn a small commission for qualifying purchases.
43 shares

Unless you’ve been living under a rock, you no doubt know what PVC is. In fact, you probably know about it even if you are living under a rock, as it’s used in underground lines. But one thing you might not be aware of is that PVC (polyvinyl chloride) and its offshoot CPVC have a major competitor called PEX.

While not as popular overall as PVC, PEX has a lot of advantages and is well worth considering for many applications. So here’s everything you need to know about this wonderful plastic pipe system and when you may want to use it.

PEX was originally invented in 1968. Due to several issues with the fittings, however, it didn’t begin finding popularity until the 2000s. The acronym, which is alternately known as XPE or XLPE, stands for cross-linked polyethylene.

Unlike PVC, PEX is highly flexible. There are also several other differences between PEX, PVC, and CPVC.

There are a lot of great qualities to PEX that make it worth using, such as:

No material is perfect, and PEX does have some major disadvantages that need to be considered before using. These include: 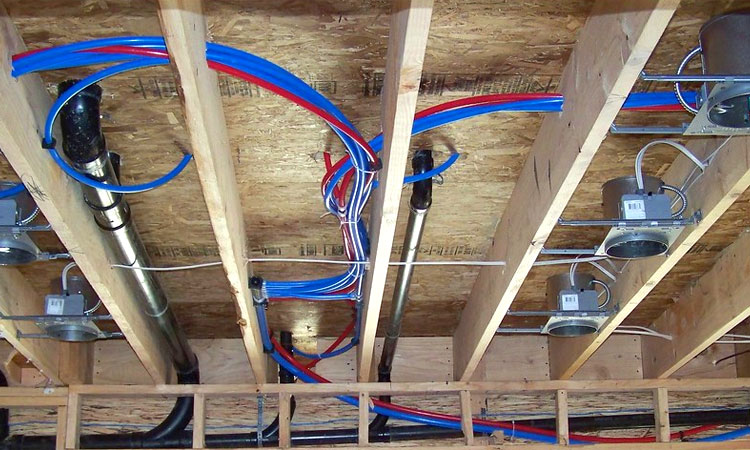 Due to its high flexibility and superior durability to PVC and PVC, PEX is often used as a replacement material for these, as well as older copper piping. It’s used for:

PEX generally comes in two colors: red and blue. As the colors suggest, this is merely a way to distinguish between hot and cold lines once installed and have no bearing on which type of PEX is actually being used.

Note: OD = Outside Diameter; ID = Inside Diameter; Numbers below are approximate and may vary slightly depending on brand due to manufacturing tolerances.

Is PEX Tubing Measured by ID or OD?

This is one question that tends to easily trip people up. In reality, PEX tubing dimensions follow the CTS (copper tubing system) standard for measurement, which uses a nominal ID over an exact ID.

Most manufacturers will list the nominal ID (inside diameter) for the size of the tube. However, some will list the OD instead, causing some confusion.

In the US, PEX must meet an SDR-9 (Standard Dimensional Ratio) above 1/2” nominal ID. This means the outside diameter to wall thickness must have a ratio of 9:1.

This can actually make it easier to figure out the size of PEX you will need for a project when mixing pipe materials, as both copper and CPVC lines use CTS standards. Just be sure to account for any SDR-9 requirements when picking a compatible nominal ID to match existing pipes.

PEX-A vs PEX-B vs PEX-C – What’s the Difference?

There are four type of PEX, three of which are distinguished by a letter designation and made using different methods.

PEX-A, also called PE-Xa and PEXa, is manufactured using the Engel method. This process involves hot cross-linking above the melting point of the polymer crystal with the cross-linking bonds made between carbon atoms.

Due to the need for sustained heat and pressure, this method takes longer than making PEX-B or PEX-C to properly extrude. However, the process results in superior flexibility and kink resistance.

PEX-B (AKA PE-Xb or PEXb) is made using the Silane method, commonly referred to as the “moisture cure” method. Unlike the Engel method, the cross-linking occurs during a secondary post-extrusion process.

Silanol condensation between two grafted VTMS (vinyltrimethoxysilane) units is accelerated using heat and moisture, resulting in C-C-Si-O-Si-C-C bridges between the polyethylene chains. While stronger, this method results in the least amount of flexibility and greatest risk of kinks.

PEX-C, which follows the same alternative spelling conventions, uses an electron beam process. Sometimes referred to as cold cross-linking, the process occurs at temperatures below the crystal melting point.

It’s the most environmentally-sound method of the three, using high-energy electrons to split the carbon-hydrogen bonds. However, the cross-linking tends to be less uniform than with the Engel method and may result in the outer layer becoming brittle if not properly controlled.

PEX-C is the middle road between PEX-A and PEX-B in terms of kink resistance and flexibility. As different manufacturers control the process in slightly different ways, you should use caution if buying from more than one source.

As mentioned, there are actually four versions of PEX. The fourth, is known alternately as AluPEX and PEX-Al-PEX.

This variant sandwiches a thin layer of aluminum between two layers of PEX, resulting in a tube that will hold its shape and prevents oxygen from coming in contact with any metal components.

Another advantage over other forms of PEX is its superior pressure and temperature tolerance, thanks to the triple layered structure.

PEX vs Copper vs CPVC – What’s the Difference?

PEX pipe is about the same price as CPVC, with 1/2” pipe running around a third the cost of 1/2” copper. However, you may need to invest money in the special tools, which could reduce those savings in small projects.

PEX doesn’t require glue or solder, making it the easiest to install of the three. It also won’t corrode like copper and is less likely to burst when frozen like CPVC.

Best of all, PEX is fully compatible with both copper and CPVC, meaning you can easily splice it into existing lines using the proper connectors.

Why is PEX Banned in California?

The short answer: Because California.

The long answer: PEX isn’t actually banned in California as of 1 August, 2009.

The original ban occurred in the early 2000s as a result of numerous lawsuits concerning PEX system failures, as well as water safety concerns filed by several California-based environmental groups. The claims were that methyl tertiary butyl ether, tertiary butyl alcohol, or other chemicals could seep through the piping and contaminate the water supply.

An environmental impact report, as well as several independent studies, proved these concerns were unfounded. During this time, it was also discovered that the system failures were due to the use of yellow brass in the fittings.

Yellow brass incorporates 30% zinc, which undergoes a chemical reaction when exposed to hard water called dezincification. This caused leaks or blockages in the pipelines.

In 2007, California approved limited, case-by-case usage of PEX using red brass, which only contains five to ten percent zinc. This new restriction proved to eliminate the system failures, and PEX was authorized for general use in 2009 with strict requirements to use only red brass fittings.