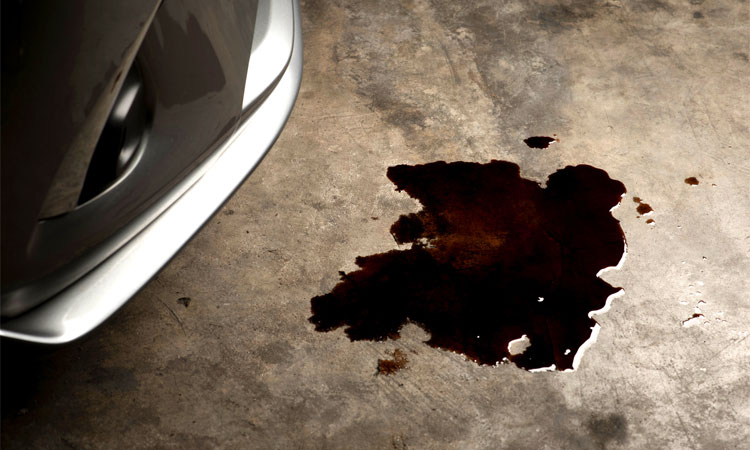 Note: This post may contain affiliate links. This means that at no cost to you, we may earn a small commission for qualifying purchases.
10 shares

You pull your car out of the driveway, then notice something unusual in the spot your car just left. There’s a small dark spot there, a small puddle of some vehicle fluid, and you don’t know what. Is it normal? Is it bad?

There are a few different types of vehicle fluids, and while some are perfectly normal, others can be trouble. So what could that fluid be? Fortunately, most car fluid colors vary, and you can usually tell just by the color.

If the puddle is bright green, orange, or pink, then it’s probably coolant (also known as antifreeze). Antifreeze is highly toxic, so keep animals and small children away from the puddle.

Leaking coolant was once normal for cars, as their radiators would spew out water and antifreeze when they got too hot. However, modern cars are a lot better about not spilling out coolant, so a puddle in a modern car is usually the result of a crack in the car’s cooling system.

Inadequate coolant levels can do serious damage to your engine, and refilling the radiator is only a stopgap solution. As such, if you happen to see a green puddle under your car, you should examine your car’s coolant system for leaks.

This is best done when the engine hot, as the leaks will be visible as hot, bubbling liquid or steam. AA1 Car has an excellent guide to help you diagnose a coolant leak.

A black puddle, or more likely a small black stain, is usually the sign of an oil leak. While the oil placed in a car is amber-colored when it enters the engine, it slowly turns black over time as it lubricates the engine.

Oil leaks most commonly occur at the oil pan and at various gaskets in the engine. Oil leaks tend to be highly localized and small, which can make them hard to find but odds are it is the result of a failed gasket.

Most gaskets are designed to be replaced, although doing so may be tough depending on its location. It’s important to replace them quickly, though, as oil is the most important engine fluid and low levels can quickly lead to engine damage.

Other common causes may include a missing washer on the oil pan drain bolt, a cracked oil drain pan, or more serious, stripped threads in the oil pan where the bolt goes into. Once the issue is fixed, cleaning the oil stain is the next step.

If you see a pink, red or dark red spot or puddle, and you most likely have a car with an automatic transmission which is leaking transmission fluid.

Keep in mind that transmission fluid may look like other fluids, but if it is leaking, the puddle is certain to be under the transmission, most likely at the points where it seals onto the car’s axles.

Such seals are designed to be replaced, but doing so necessitates the removal of the transmission, which is beyond the ability of most home mechanics.

Should you choose to do it yourself, remember that because most companies use proprietary transmission fluids, you should be certain to get the fluid which was manufactured for your specific car.

If you have a manual transmission, or a car with a differential axle (most common on all-wheel drive vehicles) you may find thick globs under your car which almost have the consistency of honey, and appear to be almost as sticky.

Gear oil is extremely viscous and leaks very slowly, usually at damaged gaskets along the transmission.

With gear oil leaks you’re looking less for a puddle than for an unusual accumulation of dirt since the gear oil tends to stick to the car and attract anything kicked up from the road beneath. It also has a distinct smell that’s hard to miss.

Keep in mind that on some four-wheel drive cars, the gear oil can be leaking near the wheel itself, so oil-like smells and unusual accumulations of dirt on the wheel should be investigated.

So if you have a puddle that looks and smells like transmission fluid on your manual car, it’s probably a power steering leak.

Power steering leaks usually occur in the engine bay, not the transmission, which should also help you narrow them down. Another indication is if the steering is a lot harder than you remember, especially at low speeds.

In regards to safety, brake fluid is actually the most important fluid in your vehicle. Most brake fluids are clear with maybe a slight amber tint. It smells similar to fish oil to a lot of people so you’ll know right away that it’s not water.

Because brake fluid is part of a car’s hydraulic brake line system, it’s necessary to stop of vehicle that’s in motion.

If you ever see that your brake fluid is leaking, DO NOT drive your car!

If you’ve got a bright blue or pink spot or puddle under your car that looks an awful lot like the windshield wiper fluid you just bought, it probably is.

Washer fluid leaks most commonly occur when the reservoir or its connecting tubes are damaged or cracked, usually after an accident.

If the damage is to the reservoir, it should be pretty obvious, since fluid will spill out as you attempt to fill the reservoir. Sometimes, the leak is simply due to the washer fluid reservoir cap not being fully on.

If the puddle is clear and odorless, it’s probably just water. The primary cause of water puddles under a car is your car’s air conditioner, which will condense water on it as it operates.

Water puddles are perfectly normal and perfectly harmless. Therefore, if you see a puddle that appears clear, usually after driving on a hot, humid day, you have nothing to worry about. 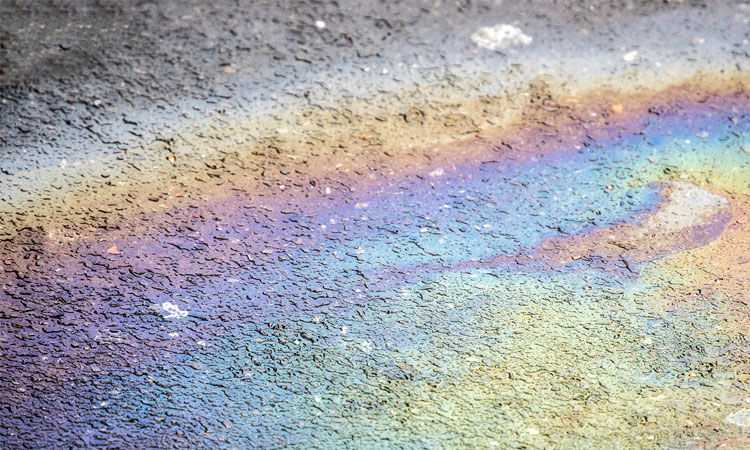 This is probably the most obvious vehicle fluid and one you least likely want leaking on your garage floor. Gasoline can be identified easily by both its odor and appearance as a puddle.

The thick, sweet smell of gasoline is familiar to almost everyone, with some of us actually liking its smell. However, the fumes can be dangerous whether you’re breathing them in or if a nearby spark causes it to ignite.

If you notice a small puddle that has all sorts of rainbow colors in it, it’s very likely you have a gasoline spill or leak. While any part of your car’s fuel system can leak, the gasket around your gas cap is the most common culprit.

1 thought on “What’s That Leak? (9 Types of Car Fluids and Their Colors)”