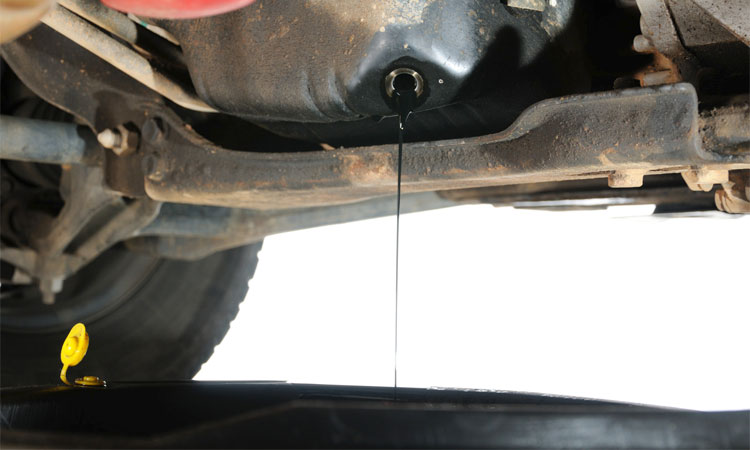 It’s not exactly a product on the top of a person’s wish list but a decent oil drain pan makes the oil change process of capturing and recycling or disposing of old oil much easier.

The best oil drain pan will be large enough to tackle the biggest vehicle you own, and is built with a way to easily empty the pan when the oil change is complete.

It has to be rugged enough to handle when full of oil, and durable enough to endure repeated usage (including the cap). Durability is the biggest issue when it comes to most oil change pans so don’t just get the first container you see at Walmart.

Before buying any oil drain pan, check your owner’s manual to make sure you’re ordering a pan that’s large enough. If you plan on changing the oil in more than one vehicle or draining coolant, look for an oil drain container that has extra capacity. The Capri Tools portable oil drain pan is an excellent choice for any motorist that simply wants a good, durable oil drain pan. This drain pan features a total capacity of 4.5 gallons (18 quarts) and includes a handy anti-splash lip, for enhanced containment.

The Capri Tools pan is also designed with durability in mind and is constructed from ultra-tough polyethylene. It’s not going bend or crack as cheaper drain pans may. We like that it comes in green so you can better see the condition of old oil. Or for those obsessive compulsive types, use the green pan for draining antifreeze and the matching black version for oil.

Owners of smaller sedans or compact car may find the drain pan almost too big, but for full-size trucks and SUVs or other high displacement engines, it’s the perfect size. The integrated handles make transporting the pain easy.

No oil change pan is perfect but Capri Tools comes close. Our main gripe is the square drain spout which makes it a bit harder to transfer used oil into milk jug or other storage container. It’s possible but you’d be better off using a funnel. If you are in search of a closed-style drain container that is capable of being stored in a variety of ways, then the FloTool 16-quart oil drain container is likely to be exactly what you’re looking for.

Made in the USA, FloTool’s enclosed drain pan works great in almost any application. Unlike others, it can be stored upright due to its use of “leak-proof” caps.

Though the FloTool 42003MI is advertised to be completely leak-proof, some consumers have reported a slight amount of waste oil leakage, with time. Like other closed-style drain pans, it uses a plastic cap on plastic threads. This unfortunately means the threads will start to strip at some point.

While this might be somewhat aggravating, one can simply place a piece of cardboard beneath their drain pan between uses as simple insurance. The Neiko anti-splash oil drain pan should be ideal for any motorist who drives a vehicle with a moderate oil capacity. This drain pan is capable of holding up to 2-gallons of oil at any one given time, making it perfect for use with a significant percentage of today’s vehicles.

Built very similar to the larger Capri Tools container above (just in a smaller size), the Neiko drain pan features heavy-duty construction, easy-grip handles for increased portability, and an anti-splash lip. But it also has the square-shaped spout which makes transferring fluids into an empty container a bit more difficult that it should be.

While the Neiko pan features a large enough capacity to be quite versatile, it might not be well suited for use in multiple vehicle households or when servicing some diesel-powered vehicles. However, this drain pan will prove more than adequate for use with most any other type of vehicle. If your vehicle’s low ground clearance makes the use of ramps necessary in order to situate a standard drain pan beneath its undercarriage, then the GarageBOSS might be worthy of a closer look.

This drain pan is only 3.5” tall, meaning that it can be placed beneath most any sedan of a stock ride height. This drain pan also carries a total capacity of 12.5 quarts and features “leak-proof” caps for enhanced fluid containment.

That said, numerous users have expressed concerns over leakage from the GarageBoss drain pan’s integrated plugs. While this seems to be a somewhat standard complaint with ANY enclosed oil change pan, it is important to understand that regular emptying of this drain pan will minimize the severity of such issues. The FloTool 42008MI Hopkins drain pan is perfect for the neighborhood mechanic, who often finds themselves changing the oil on multiple vehicles in a given week. Whether working out of a garage, a commercial shop, or as a mobile oil change service, an extra large drain pain like this is invaluable.

This drain pan is capable of holding 58 quarts of oil, making it ideally suited for frequent use, even when repetitive draining is impractical. The FloTool pan is also designed to achieve enhanced structural integrity and includes a total of four molded handles.

As you can imagine, moving around that much oil is no joke. The container itself weighs 14 pounds and then you add 50+ quarts of oil, you’re looking at well over 100 pounds. Fortunately, the built-in wheels make transport a breeze.

Due to its rather large size (38″ x 27″ x 10″), the FloTool 42008MI is not ideally suited to use beneath vehicles with minimal ground clearance. However, when raised via a quality set of garage ramps, these same vehicles can be serviced with ease. The Lumax Drainmaster is perhaps the most comprehensive and feature-rich drain pan on the market today. This drain pan holds up to 15 quarts of oil and includes built-in wheels for enhanced mobility.

One of the most noteworthy features of the Lumax is the unit’s removable catch pan, which allows users to quickly and simply retrieve a dropped drain plug, with minimal mess.

In the past, some consumers have stated that the Lumax Drainmaster’s opening is smaller than they had anticipated. This made it difficult to catch the oil flow associated with both drain plug and filter removal.

However, this issue can be averted by simply draining an engine’s oil, before moving the drain pan to catch any additional oil produced by the removal of your vehicle’s oil filter.

While this oil drain pan may be popular, it’s also prone to leaking and is made with cheaper material. If you simply must have an enclosed oil drain pan, the FloTool or GarageBOSS above are better options. Midwest Can Company offers the perfect oil drain pan for those that make a Saturday afternoon out of servicing the entire family’s vehicles. The Midwest Can Company’s 5-gallon (20-quart) oil drain pan is large enough to contend with almost any job and eliminates the need to repeatedly dispose of oil when servicing multiple vehicles in a single day.

This drain pan also features convenient carrying handles for increased portability. Because of its high sides, it’s a good option for trucks and SUVs which are naturally higher off the ground and where oil splashing out is more likely.

It is worth noting that some consumers have expressed concerns over the included spout cap’s integrity. These users have noted that the cap is prone to stripping and can begin leaking with time. However, this should be of little concern for those who empty their drain pan after each use. What Capacity Will I Need?

Oil drain pans come in a wide array of capacities. The exact capacity that you will need when purchasing such a product is largely dependent upon the total oil capacity of your particular vehicle, as well as how often you wish to empty the pan itself.

The engine oil capacity of today’s vehicles is extremely wide-ranging. Many compact, four-cylinder cars have oil capacities of as little as 4 quarts. On the other hand, a significant number of truck, heavy-duty, and high-performance gasoline engines hold as much as 8-9 quarts of oil.

At the upper end of the oil capacity spectrum are diesel engines, which quite often feature oil capacities in excess of 10 quarts.

Before purchasing an oil pan of any type, it is important to consider how much capacity is needed to contain the amount of oil that is to be drained from your vehicle during service.

A 10-quart oil pan will serve as nothing but an aggravation when attempting to change the oil on a Powerstroke-equipped Ford truck, with an oil capacity of 15 quarts. However, an oil pan of this size might prove more than ample for a late model, four-cylinder Toyota Camry, which holds nearly 5 quarts of oil.

Open vs Closed Style (Which is Better?) 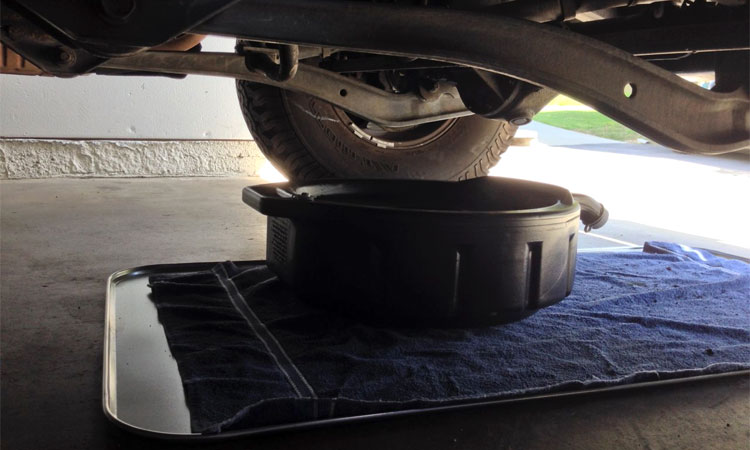 Oil drain pans are offered in both open and closed styles, each of which offers its own distinct advantages. The following will explain these advantages, as well as few disadvantages, of each type of drain pan.

Open style drain pans are extremely popular among consumers, largely because of their simplicity. Drain pans of this nature consist of a large dished design, with an attached spout.

Oil is drained directly into the open top of these pans and is later discarded through the assembly’s spout. Open-style drain pans present little splatter while in use and can be cleaned with relative ease.

On the other side of the coin, recovering a drain plug from an open drain pan typically involves dunking your hand in wrist-deep waste oil. Additionally, some spillage can occur when attempting to empty an open-style drain pan, due to the fact that there is nothing to prevent overflow around its edges.

Closed style drain pans feature a shallow catch basin, with a larger storage reservoir contained below. As oil drains into the pan, it runs through a small centrally located hole, where it is deposited into this reservoir.

Drain pans of this type also feature an attached spout, that can be covered with a threaded cap. Most closed style drain pans also come with a plug that covers the catch basin’s drain hole when not in use. This minimizes the chance of inadvertent spillage.

Some consumers find that closed drain pans present more splatter than their open-style companions, and often overflow if their drain hole becomes clogged. Additionally, the caps and plugs associated with a closed-style drain pan are also prone to stripping, due to their plastic composition.

It is difficult to beat the simplicity of an adequately sized, open-style drain pan. Pans of this nature can be used in almost any application, and will not overflow unless filled past their capacity.

There is also no reason to worry about stripped plugs and caps when using a closed-style drain pan, as few such pans feature apparatuses of this type.

What Should I Do With My Used Motor Oil?

Used motor oil should always be disposed of in an approved manner. This typically involves taking any oil of this type to an approved disposal center, where it will be discarded in compliance with waste oil laws.

Waste oil can be poured from a catch pan into an empty milk jug or oil container prior to disposal, in a bid to simplify transport. For for information, see: How to Dispose of Used Motor Oil