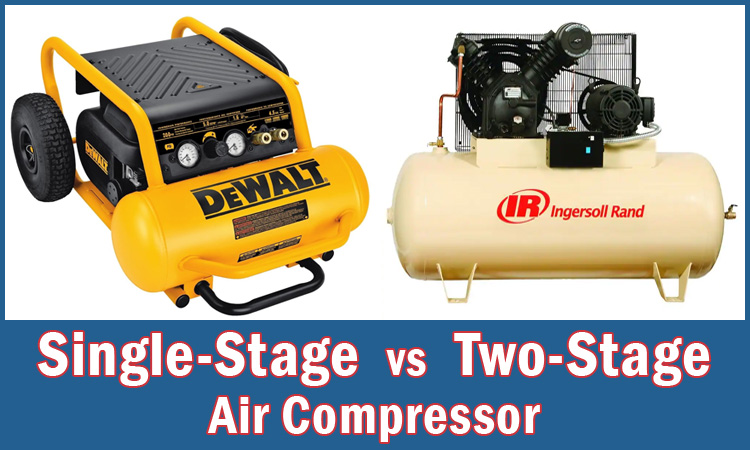 Air compressors are incredibly useful tools to keep around. Not only are they great for powering pneumatic tools such as nail guns, but they’re perfect for airbrushing and other often domestic hobbies.

In addition, when paired with a quality air hose, the air compressor can be far more efficient than using electric power tools and are often safer.

But what kind of air compressor should you buy? The most common types are single-stage and two-stage. Both have their uses but also come with their own drawbacks. Let’s take a look at these two types and what sets each one apart.

What is a Single-Stage Air Compressor? 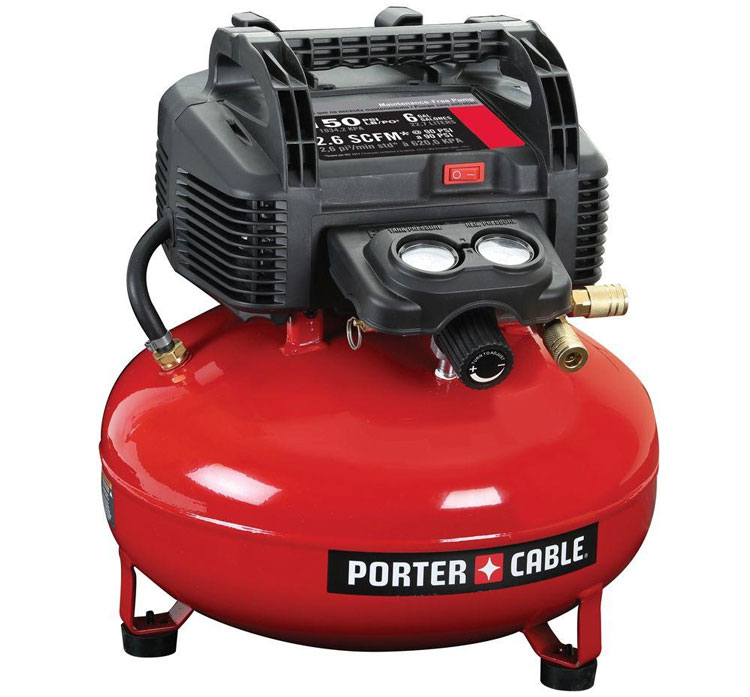 Single-stage air compressors are often all you’ll need for smaller jobs. They have a single compressor cylinder and are generally much more affordable than the two-stage models. As a result, these are by far the most popular type of compressors out there, even if some aren’t very powerful.

How Does a 1-Stage Compressor Work?

Air is pulled in through the inlet valves past a filter that removes any unwanted particles and accumulates in a compressor cylinder. Once the cylinder is full, the inlet valve closes, and a signal is sent to the crankshaft.

This causes the crankshaft to rotate the pistons upwards, which compresses the air to 120psi. Finally, the compressed air is pushed through the exit valves into a storage tank, where it’s stored until needed.

These compressors function on the positive displacement theory and are sometimes referred to as piston compressors.

By far, the most significant advantage of single-stage compressors is the price. A lot of pneumatic tools on the market don’t require huge amounts of CFM or more than 100psi of pressure, so the single-stage is a perfect means to power them. The compressor also needs fewer parts, as cooling isn’t required under the lower air pressure.

The simpler design and fewer components make single-stage compressors much easier to maintain. There’s also less vibration when in use, and the overall size is smaller than that of a two-stage.

The compressor cylinder on a single-stage needs to be larger to provide enough pressurized air, which means it can sometimes be nearly as heavy as a similar-sized two-stage compressor. They also need a larger flywheel and tend to require a little more power.

In addition, a single-stage can be quite noisy, depending on the model you purchase. Lastly, there’s a higher chance of air leakage, which can reduce efficiency. 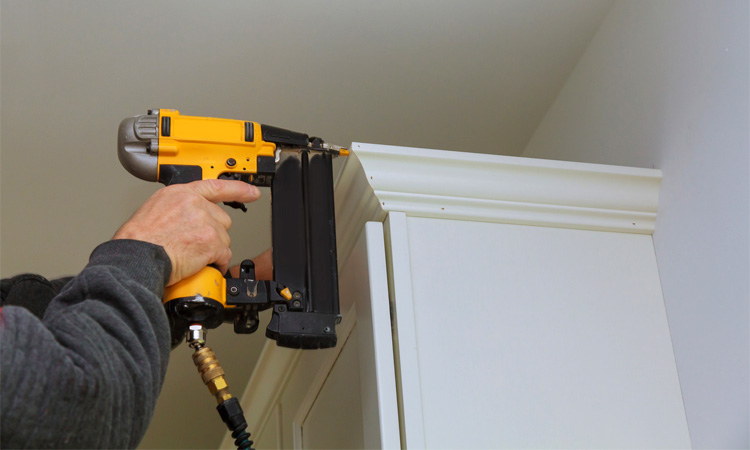 Due to its low cost and decent output, single-stage compressors are useful for a wide range of tasks. These include:

Single-stage compressors are powerful enough to run a wide range of pneumatic woodworking tools. Nailing, drilling, sanding, and sawing can now be performed through pneumatic power to get the job done quickly and more safely than with traditional tools.

Topping off air in your car’s tires is one of the most common uses for a compressor but operating an impact wrench or air ratchet is a huge time saver when it comes to auto repair and maintenance.

Metalworking requires far more effort than working with softer materials such as wood, yet the single-stage compressor can still power tools for a wide range of tasks when paired with the appropriate pneumatic tools. This includes grinding, ratcheting, riveting, and shearing.

Whether you’re building a scale model or working on a full-sized car, single-stage compressors are perfect for use with an airbrush. The pressure allows for even the more advanced airbrushes with variable flow settings without stuttering.

What is a Two-Stage Air Compressor? 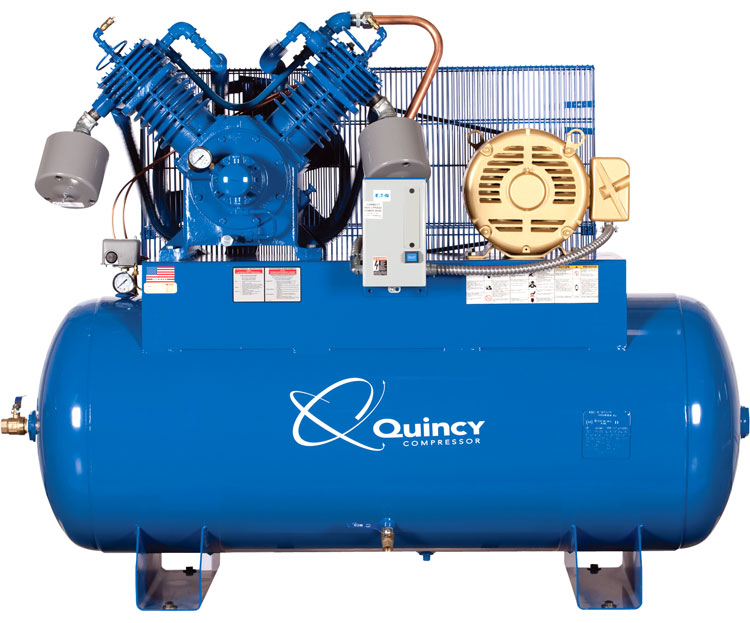 Two-stage compressors are the next step up from the single-stage. While performing more bang, they also require more buck for that bang. However, they’re indispensable when it comes to commercial projects.

How Does a 2-Stage Compressor Work?

Two-stage compressors work almost identically to their single-stage siblings. The difference comes in the presence of a second compressor cylinder. Air passes from the first cylinder to the second instead of the storage tank.

In the second cylinder, the air is further compressed to 175psi. To help prevent overheating from the extra pressure, a water-powered intercooling unit is placed between the two cylinders, cooling off the air before the second stage.

The second cylinder has a smaller piston and compression space, allowing it to achieve this higher pressure. The resulting air is then made available for use, just like in the single stage.

Two-stage compressors provide more power at a higher efficiency than single-stage. This equates to around 15-16 kW/100 CFM and 5 to 30HP compared to the single-stage’s 22-24 kW/100 CFM draw for only 5HP. They’ve got smaller cylinders and tend to be less noisy.

Unfortunately, two-stage compressors are the flip side of the coin compared to the single-stage and tend to be weakest where the latter is strongest. The overall size can be much larger, despite having a smaller flywheel.

They also produce far more vibration and require cooling. This means more parts, which in turn equates to much more frequent maintenance. 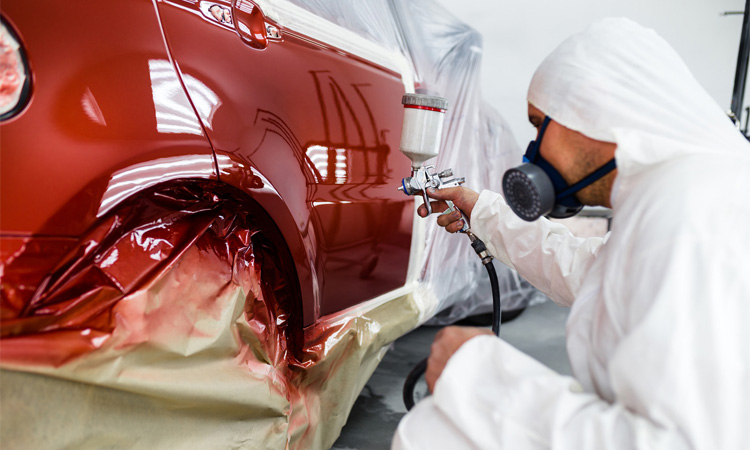 The added power of a two-stage compressor makes it almost essential when it comes to working with heavier equipment such as in aircraft assembly plants.

These compressors once again handle a wide range of tasks, such as assembling, cutting, fastening, painting, and shaping. Because of its power, these tasks can be completed in a fraction of the time it would take for manual tools, and the process is usually easy to automate.

When it comes to working on cars, a lot of power tends to be needed. You might get by with a single-stage for a few aspects, but the two-stage will be able to handle almost any pneumatic task set before them. This includes heavy lifting, greasing, screwing various fittings, and painting entire vehicle bodies.

Almost every aspect of food and soda manufacturing is now handled through pneumatic devices, from shaping containers to labeling, filling, sealing, and packaging. In large-scale baking plants, two-stage compressors may also be responsible for mixing, powdering, and applying icing. They’re also responsible for chopping, cooling, and cleaning tasks.

There are two important details we would be amiss in leaving out. First of all, both single-stage and two-stage air compressors come in a wide range of shapes and sizes. It’s important to choose the best size for your needs, not just the number of cylinders,

Which brings us to the second detail: There are also three-stage compressors out there. However, these are used exclusively in heavy industry and are far too expensive and powerful for independent or small-scale commercial ventures.