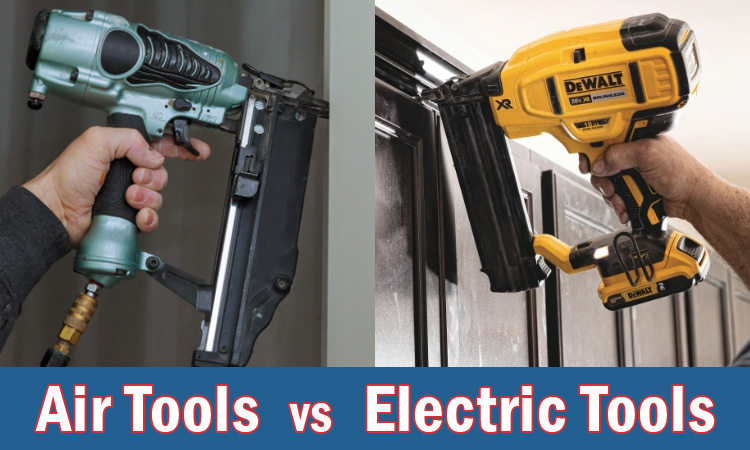 Note: This post may contain affiliate links. This means that at no cost to you, we may earn a small commission for qualifying purchases.
0 shares

Sometimes you don’t have the right power tool for the job because you’ve never needed a random orbital sander before, or your favorite drill’s motor overheats and melts, or your neighbor “borrowed” your sawzall and never gave it back.

Sometimes tools just get so old and worn-out that it’s more efficient to replace them than it is to try to repair them. Powered tools come in two varieties:  electric (including cordless) or air-powered.  So which is better? Air-powered (also called pneumatic) tools are powered by compressed air supplied by an air compressor. Air compressors are compact tanks that can store air in compact “pancakes” of one gallon to behemoth tanks capable of holding 500+ gallons at a time.

The more compressed air you have available, the more powerful tools you can run or even run more than one tool at a time. Air runs from the compressors to the tools via a flexible hose with quick-change adapter bits for rapid tool switching.

Air-powered tools are generally cheaper than electric tools and are intended to be easily and frequently replaced. Compared to electric tools, air-powered versions are lighter and smaller, but they pack the same (or often higher) amount of punch.

As airflow from the compressor is adjustable, air tools can deliver more torque and RPM, enabling you to finish jobs faster and easier.

By contrast, electric tools are much less complicated to use. As long as the battery has some juice or the power cord is plugged in, you’re ready to rock and roll.

No waiting for the compressor to fill up and having to constantly swap different air tools on the same hose. Convenience is a huge positive when it comes to electric tools.

So Which is Better?

Professionals often use a combination of both electric and pneumatic and will switch off depending on their specific tool need and power requirements.

If you’re just looking for a drill to use in your garage for one-off projects, cordless drills will do you just fine.

However, if you’re looking for an interchangeable solution for, say, working on your car, an air compressor and air tools could be a good investment.

As technology improves, I suspect cordless electric models will start to dominate the market for most tools but we’re not quite there yet. In the end, whether to buy the electric or air-powered version of a tool should be based on your personal use.

12 thoughts on “Air Tools vs. Electric/Cordless Tools – Which are Better?”